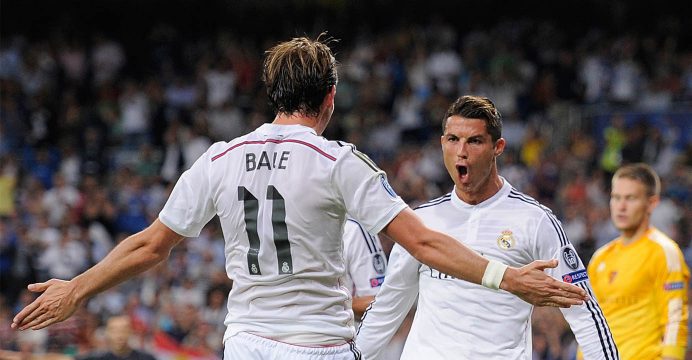 Real Madrid will be without talisman Cristiano Ronaldo and record signing Gareth Bale for their trip to Espanyol on Sunday, where they aim to equal Barcelona’s record of 16 consecutive La Liga wins.

Ronaldo scored the equaliser in Real’s thrilling late turnaround to beat Sporting Lisbon 2-1 on Wednesday but has been ruled out with the flu, while Bale is still carrying a hip injury he sustained against Sporting.

“Cristiano will not travel with us, he has a sore throat and we’re not going to risk him,” Zidane told a news conference on Saturday ahead of the trip to Barcelona to face Espanyol, reports Reuters.

“We have games every three days and we can’t take risks with such an important player. Bale received a strong knock to the hip on Wednesday and he’s not going to travel either.”

“This is a group, we have important players so when a player has something wrong it’s better for someone else to come in and do well, we always have to think about the team.”

Real equalled a club record of 15 consecutive wins set in 1960/61 last week against Osasuna and victory on Sunday will see coach Zinedine Zidane match the 16 straight wins set by Pep Guardiola’s Barcelona in the 2010-11 season.

Zidane said Ronaldo’s absence would see out of favour Colombian international James Rodriguez return to the side, and he backed Karim Benzema after a disappointing return to action from the Frenchman against Sporting following a hip injury.

“I’ve said two or three times that James is training very well and he’s going to play, he’s important for the team and I think he’s really motivated,” Zidane said.

“He wants to play like everyone else and he’s going to contribute a lot.”

“Benzema is fine,” added the coach.

“The other day was his first start for a while and we’ll see what happens tomorrow.”