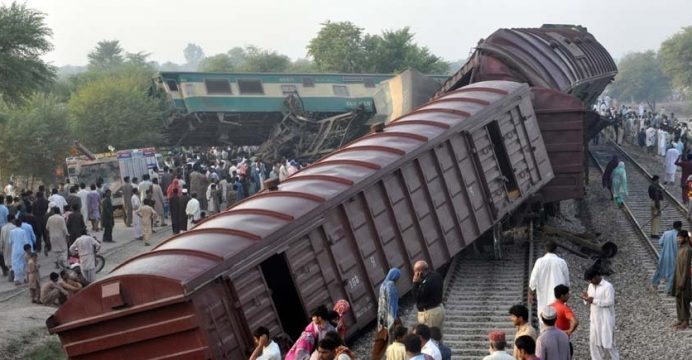 At least six people were killed and over 150 others injured when a passenger train collided with a cargo train in Pakistan’s central Multan district on Thursday morning, local officials said.

City police officer Muhammad Rizwan said the death toll is feared to rise as 15 among the injured are in critical condition, adding that the passenger train’s engine and four compartments derailed in the accident, reports BSS.

He said the passenger train, which was en route to the country’ s southern port city of Karachi from northwest Peshawar city, hit the cargo train,about 15 minutes after leaving the Bucch Railway station in Multan, a district of Punjab province.

Deputy Commissioner of Multan Nadir Chattha said that the freight train was forced to stop on the track after it overran a man who committed suicide when the passenger train, coming from the same direction, collided with it.

The injured are being shifted to various hospitals of the city by rescue teams. Meanwhile, local railway authorities have arranged another train to take the survived passengers to their destination in Karachi.

Rescue teams said that the death toll is feared to rise as some people are still stranded in the bogies of the passenger train.