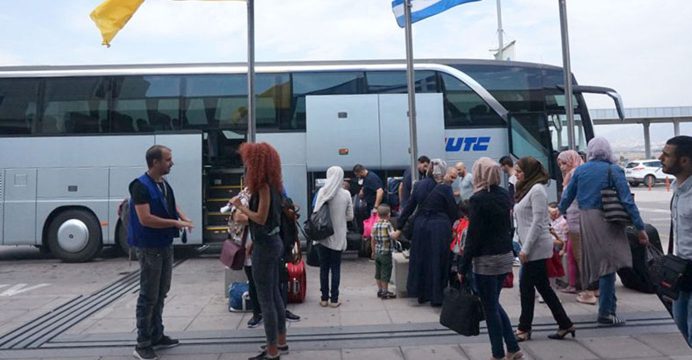 IOM this week has helped 222 asylum seekers relocate safely from Greece and Italy to other European Union (EU) Member States under the EU’s relocation programme, continuing a trend of increased numbers of relocations in recent months.

EU relocations from June to August this year reached 2,596 people, which is 60 percent of the total number relocated so far under the scheme.

An average of 865 people per month were relocated in the last 3 months, a marked increase over the average of 233 per month in the 8 months before that.

Relocation movements this month clearly show that this upward trend is continuing. Some 1,356 people have been relocated or are scheduled to do so in September, which will be the highest monthly total since the start of movements under the programme in October 2015.

“Relocation numbers are still far too low, particularly those from Italy, but we are happy to see that the speed and uptake is changing for the better and we continue to strongly encourage this,” said Eugenio Ambrosi, Director of IOM’s Regional Office for the EU, Norway and Switzerland.

This week, 184 asylum seekers were relocated safely from Greece to Germany and Ireland with support from IOM in Greece, while 38 people were relocated from Italy to Switzerland with assistance from IOM’s office in Rome.

IOM staff accompanied the groups on the flights from Greece to ensure safe and dignified travel to their destination.

Suzan Abdul Wahab, a Syrian, told IOM staff that she was happy and relieved about the chance to continue life in Europe with her daughter.

“It has been six months since I left Aleppo and came to Greece with my daughter. I am a lawyer and my daughter is going to continue her studies at university. I am looking forward to the chance to start working again as a lawyer, maybe in an NGO or an organization because I really love to help other people,” she said before leaving from Greece.

IOM provides pre-departure health checks to ensure that people are fit to travel. It also organizes pre-departure orientation sessions to provide people with basic information about the places that they are being relocated to. IOM, in close cooperation with Greek authorities and other agencies, also ensured that the relocations of the unaccompanied children from Greece this week were in their best interest.

A total of 3,677 asylum seekers have been relocated from Greece and 1,065 from Italy to other EU member states since the start of the programme.