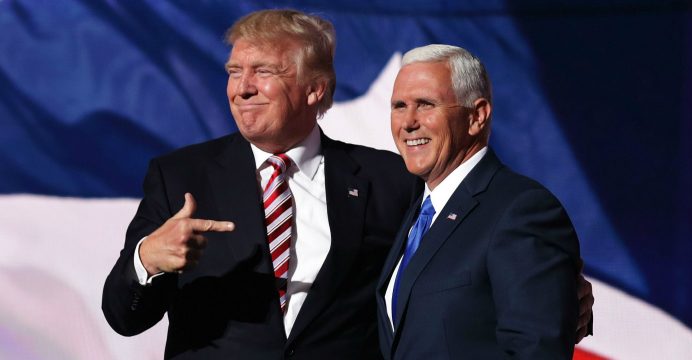 Republican White House hopeful Donald Trump’s running mate released 10 years of tax returns on Friday, but his billionaire boss still refuses to do so, leading critics to cry foul over his lack of transparency.

Mike Pence’s tax returns are quite simple compared to the financials of bombastic real estate magnate Trump. Pence reported that he and his wife Karen earned a total of $113,026 in adjusted gross income last year, most of it from his salary as governor of Indiana and including nearly $9,000 in pensions or annuities, reports BSS.

They paid $8,956 in federal income taxes, at an effective tax rate of 12.40 percent. The Pences were able to obtain a relatively low tax rate thanks to losses and tax breaks they claimed, including $8,923 in gifts to charity.

Donald Trump and Indiana Gov. Mike Pence before addressing the crowd during a campaign stop in Westfield, Ind., on July 12

“The Pence family has been honored to serve their state and their nation for the past 16 years, while raising three great children and putting them through college,” said spokesman Marc Lotter.

“These tax returns clearly show that Mike and Karen Pence have paid their taxes, supported worthy causes, and, unlike the Clintons, the Pences have not profited from their years in public service.”

Every major US presidential nominee since Richard Nixon has released their tax returns before the election, but Trump has repeatedly punted on the issue.

In releasing Pence’s returns, Trump’s campaign again said Friday that the candidate “plans to release his tax returns upon completion of a routine audit.”

Trump’s rival for the presidency, the Democratic nominee and former first lady Hillary Clinton, has described Trump as “dead wrong” for saying that his tax returns were not the concern of everyday Americans.

“He clearly has something to hide,” she said this week.

Christina Reynolds, a deputy spokeswoman for Clinton’s campaign, added: “As prominent Republicans have speculated, Trump’s returns could reveal further ties to Russia and its oligarchs, the truth about his personal wealth, or more lies about his charitable contributions. But we won’t know until we see them.”

“We’re pleased to see that one member of the Trump ticket has decided to meet the long-held threshold for disclosure in a modern day presidential campaign,” she said.

“But it’s Donald Trump… running to be our next president.”