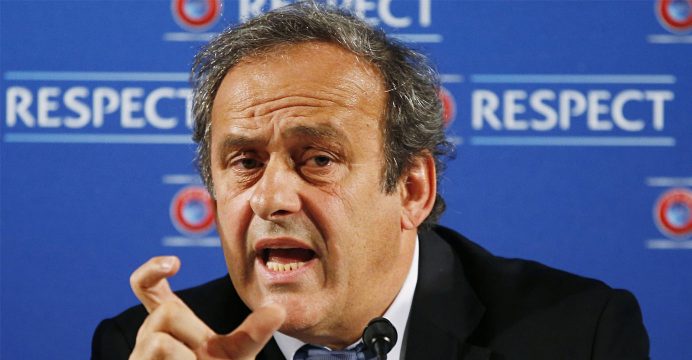 Disgraced former UEFA president Michel Platini will attend the UEFA Congress in Athens next week at the invitation of European football’s governing body, but paying his own way for a final farewell.

Platini “will travel there by his own means and will not give a press conference” at the Congress, when the UEFA executive committee will vote on his successor, a member of his entourage told AFP.

However, the move could get Platini into hot water with FIFA.

The former French international, a three-time European footballer of the year, is the key figure in the scandal that brought down FIFA president Sepp Blatter.

Platini was on the receiving end of a suspect two-million-Swiss-franc ($2 million, 1.8 million euros) payment that Blatter authorised in 2011.

FIFA has said the payment amounted to an ethics violation and has suspended both men for six years.

Blatter and Platini insist it was a legitimate payment for an unpaid balance that FIFA owed the then-UEFA boss for consulting work done a decade earlier.

Platini lost his CAS appeal against his FIFA ban earlier this year, but the court cut his suspension to four years.

When contacted by AFP to ask if Platini’s appearance at the Congress could represent a breach of his ban, a FIFA spokesman simply replied that his participation “without prior request would be problematic”.

No request had been made to FIFA by Wednesday evening.

“Given that the date for UEFA’s electoral Congress has been known for a long time, why have UEFA not transmitted a request sooner?” asked the FIFA spokesman.

In Athens, the 55 UEFA member federations will vote between two candidates to succeed Platini: Aleksander Ceferin of Slovenia and Dutchman Michael van Praag.