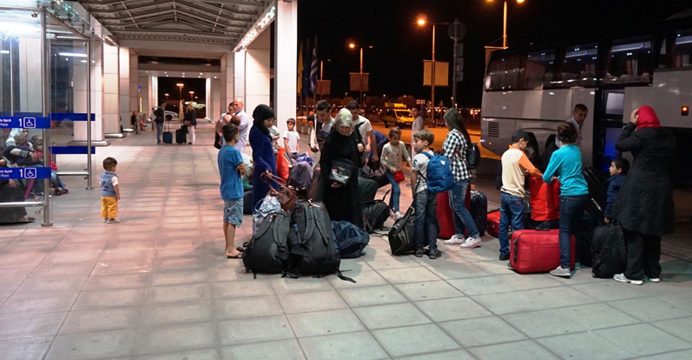 IOM helped two groups of asylum seekers to leave Greece for Finland this week under the European Union (EU)’s ongoing relocation programme. Of the 82 people relocated, 11 were unaccompanied children.

42 people were relocated from Greece to Finland. The group comprised 36 Syrians, six stateless individuals and one unaccompanied child. Today, a group of 38 Syrians, one Iraqi and one Eritrean are traveling from Athens to Helsinki. There are 10 unaccompanied children among them.

“Finland has accepted the largest number of unaccompanied children under the relocation scheme – 90 percent of them – and continues to do so. It also provides good ongoing support and assistance after they arrive,” said Chrysanthi Argyrou, IOM’s Pre-Departure Coordinator in Athens.

“Unaccompanied children are a very vulnerable group and need special care and attention. There are hundreds of unaccompanied and separated children in Greece, many of them with war trauma and injuries who have lost connection with their parents and families,” she added.

IOM works closely with the Greek authorities and other agencies to assess the best interests of unaccompanied children eligible for relocation to other EU member states.

IOM staff, including medical escorts, accompanied the groups on the flights from Athens to Helsinki this week to take care of five medical cases and four pregnant women, and to ensure that everyone arrived safely.

Eritrean Danait Tadasse, 30, said that she was happy and excited to be going to Finland. “I stayed in Greece for six months and now I am looking forward to starting a new life in Finland,” she said.

A total of 3,493 asylum seekers have been relocated from Greece to other EU member states since the start of the programme in November 2015, and another 656 people are scheduled to travel in September.

IOM provides pre-departure health checks to ensure that people are fit to travel. It also organizes pre-departure orientation sessions to provide people with basic information about the places that they are being relocated to.

IOM has welcomed the EU relocation programme and called for intensified action by all EU member states to help stranded migrants and refugees in Greece and Italy.