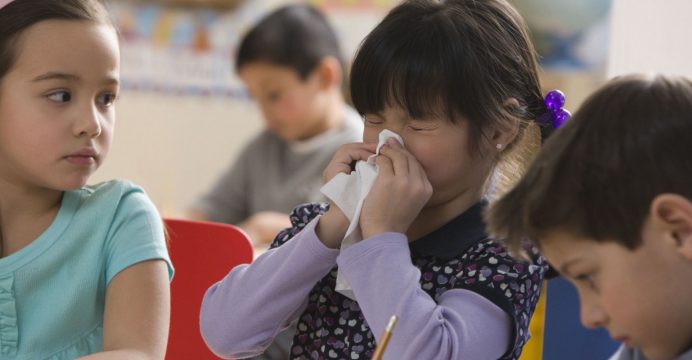 Research presented at this year’s European Respiratory Society (ERS) International Congress in London, UK shows that exposure to antibiotics early in life is related to increased risk of developing allergies later in life. The research is by Dr Fariba Ahmadizar, Utrecht University, Netherlands and colleagues.

Some previous research has suggested that early life exposure to antibiotics is associated with an increased risk of developing allergies later in life, but results are inconsistent. In this new research, PubMed and Web of Science databases were searched for observational studies published from January 1966 through November 11, 2015. Studies were included that assessed the association between antibiotic consumption during the first 2 years of life and the risk of eczema or hay fever later in life. A total of 22 studies (including 394,517 patients) were selected to study the risk of eczema and 22 studies (including 256,609 patients) to study the risk of hay fever, with some of these being the same (12 studies including 64,638 patients) studies for both conditions. The increased risk of eczema due to early life use of antibiotics varied from 15% to 41% depending on the type of study analysed. Use of antibiotics in early life also increased the risk of hay fever in later life by 14% to 56% again dependent on the type of study analysed.

Furthermore, the association was stronger if patients had been treated with 2 courses compared with one course of antibiotics both for eczema and for hay fever.

The authors suggest the mechanism behind this effect is the immunomodulatory effect of antibiotics, and the disruption of the microorganisms (microbiome) in the gut caused by antibiotics which can lead to reduce immune responses.

Dr Ahmadizar concludes: “Early life exposure to antibiotics is related to an increased risk of both eczema and hay fever later in life.”