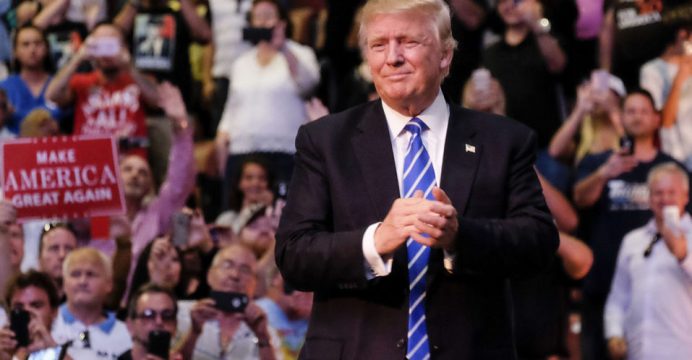 Donald Trump landed ahead of Hillary Clinton in a new poll ﻿

Trump beat Clinton 45 to 43 percent in the new CNN/ORC Poll, which showed stark divisions in the way different demographics plan to cast their ballots.

Clinton has mostly maintained an edge over Trump in recent national polls. She has dramatically deeper ground operations in swing states and trounced Trump in August fundraising.

Trump pushes just ahead of Hillary in new poll

But the Republican flagbearer’s unorthodox White House bid, including his campaign’s apparent imperviousness to criticism about his harsh rhetoric, assures a tight contest leading up to November 8.

The near tie in the latest CNN/ORC results came in sharp contrast to Clinton’s eight-point lead among registered voters in its early August poll following the Democratic Convention.

According to CNN, huge gaps exist in voting preference based on gender, age, race, education, and partisanship. Women prefer Clinton 53 to 38 percent, while men favor Trump 54 to 32 percent, it said.

Voters younger than 45 give Clinton an edge (54 percent to 29 percent for Trump), while non-whites favor Clinton by almost four-to-one, poll results showed.

Enthusiasm for the overall 2016 campaign remains comparatively low. Almost half of voters say they are less enthusiastic about voting this year than in previous elections, with just 42 percent reporting that they’re more excited.

This marks the first time since 2000 that a significantly larger share of voters say they are less excited, CNN polling results indicate.

The CNN/ORC poll was conducted from September 1 to 4 by telephone among a random sample of 1,001 adults. It included results from 886 registered voters and 786 likely voters. For results among registered or likely voters, the margin of error is plus or minus 3.5 percentage points.