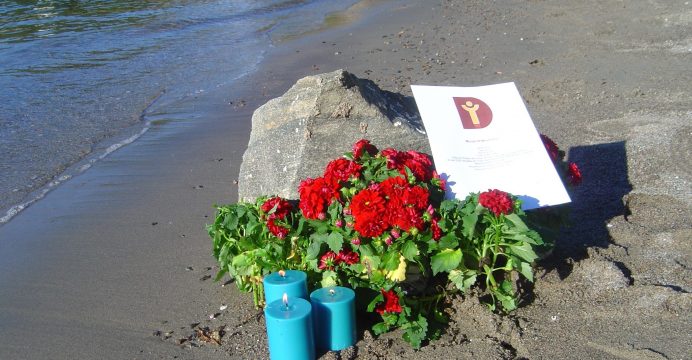 It has already been one year since heart-wrenching photos surfaced of a 3-year-old boy who, forced to flee his home in Syria and subjected to a grueling journey from the Middle East to Europe, was found facedown, washed up on a beach in the Turkish resort town of Bodrum.

Images like these are necessary reminders of what people from countries like Syria face day in and day out. But one snapshot fails to encapsulate just how much of a toll war can take on a country’s citizens, especially its children.

The Alan phenomenon is not an isolated one. Images of other children have also reverberated across social networks worldwide, like those of Omran Daqneesh, the 5-year-old boy who was photographed on Aug. 17 in the back of an ambulance in Aleppo, Syria, after being rescued from rubble.

The photos of Omran and his older sister, who was also in the ambulance, put another facet of the conflict into perspective. Civilians still stuck in Syria are constantly hammered by airstrikes, while access to medical care has become more and more sparse.

Take, for instance, 11-year-old Yaman Ezzedine, who was dying from meningitis ― a totally curable illness ― in the blockaded city of Madaya because treatment was inaccessible. The Syrian Arab Red Crescent finally evacuated him and a few other children in August after The WorldPost first called attention to his dire condition.

Children in the region are faced with a variety of life-threatening conditions, including renal failure, rheumatic fever, shrapnel wounds, and liver and heart disease. They’ve been reduced to “walking skeletons,” according to testimonies gathered by Amnesty International.

Once children leave Syria as refugees, they’re met with a host of new troubles. The journey from the Middle East to Europe is a grueling one that many, like Alan, don’t survive. More than 3,000 people have already died in the waters between Turkey and Greece this year, according to the U.N. Refugee Agency.

Tens of thousands of these children have lost their parents or become separated from them along the way. Europe has welcomed an unprecedented number of unaccompanied children seeking refuge across the Continent in the last two years, according to Pew Research Center data from May, and many of those are from Syria.

For children who do reach countries like Greece these days, they’re relegated to government-run refugee camps that are lacking in basic services. Since many European countries have shut their borders, Greece has become somewhat of a holding pen for people.

Several organizations are focused on improving the fate of children.

There are about 27,000 refugee children in Greece, Eleonora Mansi, the International Rescue Committee’s child protection manager, told The Huffington Post. The vast majority of them “have experienced traumatic events and violence during [their] journey or back in their country, like the death of some of their parents or relatives.”

The IRC sets up safe spaces in refugee camps across Greece, tailoring activities to different age groups “so children can restart, have a routine, restore their well-being and their normalcy because that’s what they need after so much trauma.”

Children are forced to grow up more quickly, she said, because of the horrors they’ve faced and the new roles they now play in the Greek camps: “Even here they’re expected to support their younger siblings and parents with translation and kind of help parents who have also experienced traumatic events and are less able to provide a caring environment.”

The organization is also working with government partners to find solutions for unaccompanied children, Mansi said, “whether it’s staying [in Greece] and being fostered in a family or moving on and rejoining their families.”

Lucy Carrigan, the IRC’s regional communications officer, fears for the future of these children, even if they’re in good hands.

“We certainly expect that these children will be in Greece certainly for months to come if not longer,” she said.