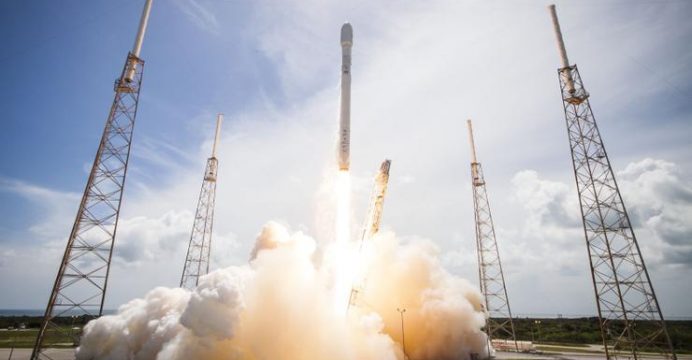 An explosion destroyed a Falcon 9 rocket belonging to Elon Musk’s SpaceX and its cargo during preparations for a routine test firing at Cape Canaveral in Florida on Thursday, two days before it had been due to blast off and place a satellite in orbit, reports Reuters.

SpaceX said there were no injuries and that an “anomaly” during the static fire test resulted in the loss of the rocket and a communications satellite owned by Israel-based Space Communication which was going to be used by Facebook to expand internet access in Africa.

A video showed a fiery blast ripping through the upper part of the rocket before the vehicle collapsed in flames on the launch pad at Cape Canaveral Air Force Station just after 9 a.m. EDT (1300 GMT). A plume of black smoke poured into the air. 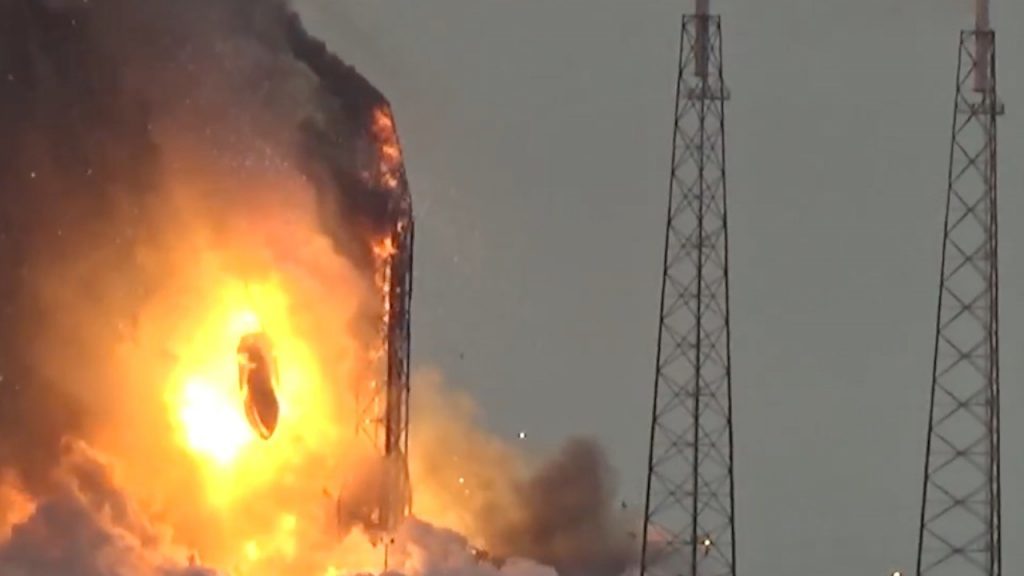 The rocket’s loss occurred while the first and second stages were being filled with propellant, the company said late on Thursday in a statement.

It was not immediately known to what extent SpaceX’s launch pad was damaged or what the impact would be on the dozens of NASA and commercial satellite missions on its launch schedule.

The company has a second launch site at California’s Vandenberg Air Force Base, and it has also leased one of the old space shuttle launch pads adjacent to its Cape Canaveral site. A fourth launch site is being built in Texas.

Several customers expressed support for SpaceX while saying they were not sure of the impact of the explosion on their own plans.

“We’re confident in SpaceX and that they will find and resolve any issues causing this incident, and we will be ready to go once that occurs,” Iridium Communications Inc said in a statement.

SpaceX had been due to launch its 29th Falcon 9 rocket, which carries a list price of $62 million, before dawn on Saturday, carrying the Spacecom-owned AMOS-6.

Facebook would have been among the customers for bandwidth on that satellite. Last year, it said it was partnering with Eutelsat Communications to boost data connectivity to large parts of Sub-Saharan Africa.

The explosion could derail the sale of Spacecom for $285 million to Beijing Xinwei Technology Group. The companies unveiled the agreement last week, but said it was contingent on the successful launch of the satellite and completion of its in-orbit tests.

In a statement to the Tel Aviv Stock Exchange, Spacecom said the loss will have “a significant impact” on the company. Its shares closed down 8.9 percent at 38.95 shekels.

The commercial space office of the Federal Aviation Administration, which oversees commercial rocket launches in the United States, has inspectors at the launch site who were overseeing the preflight engine test, and the agency is collecting information about damage to the pad, spokesman Hank Price said.

People in buildings far from the facility felt shock waves, but local authorities said residents were not at risk. Robin Seemangal, a space reporter with the Observer newspaper, quoted a source at the facility who said it felt like the office they were in had been hit by lightning.

“We actually thought the building was collapsing, it shook us so bad,” Seemangal wrote in a tweet, quoting his source.

In a post from Africa, Facebook founder Mark Zuckerberg said he was deeply disappointed at the loss of the satellite which he said would have provided connectivity to many entrepreneurs and others across the continent.

“We remain committed to our mission of connecting everyone, and we will keep working until everyone has the opportunities this satellite would have provided,” he wrote.

Eutelsat said it also regretted the loss but remained committed to growing broadband in Africa. The potential impact on its revenues was estimated at up to 50 million euros by 2019, the company said in a statement.

SpaceX had planned to dispatch as many as nine more missions before the end of the year, including two flights to place a 20-member satellite network into orbit for Iridium.

It was due to launch its next mission in November to fly cargo to the International Space Station for NASA. SpaceX is one of two companies that transport cargo to the orbiting laboratory, which flies 250 miles (400 km) above Earth.

NASA in a statement said it remained confident in SpaceX. It was too soon to know how upcoming SpaceX launches to the space station would be affected, but other cargo ships would be able to keep the station stocked with supplies and science experiments, the statement said.

Shares of Musk’s companies Tesla Motors and SolarCity closed down 5 percent and 9 percent, respectively. R.W. Baird analyst Ben Kallo said those share price moves were in response to a disclosure on Wednesday by Tesla, which has agreed to buy SolarCity, that it would need to raise additional funds, and not to the explosion in Florida.

SpaceX says it has a backlog of more than $10 billion in launch orders from customers including NASA and commercial companies. On Wednesday, it said it had signed its first customer to use a previously flown Falcon 9 rocket, but that launch was not due until later this year. The rocket that blew up on Thursday had never been flown before.

SpaceX was founded by Musk in 2002, and the Hawthorne, a California-based company began launching its Falcon 9 rockets in June 2010. Since then, it has racked up 27 successful flights and one launch accident in June 2015 that destroyed a load of cargo headed for the space station.

Earlier this year, it broke a monopoly by United Launch Alliance, a partnership of Lockheed Martin and Boeing, to win a military satellite launch contract.

Musk set up SpaceX with the goal of slashing launch costs to make travel to Mars affordable. The company plans to fly its first unmanned spacecraft to Mars in 2018 and to send humans to the red planet as early as 2024.

Musk is expected to unveil details of his Mars program at the International Astronautical Congress in Guadalajara, Mexico, next month.