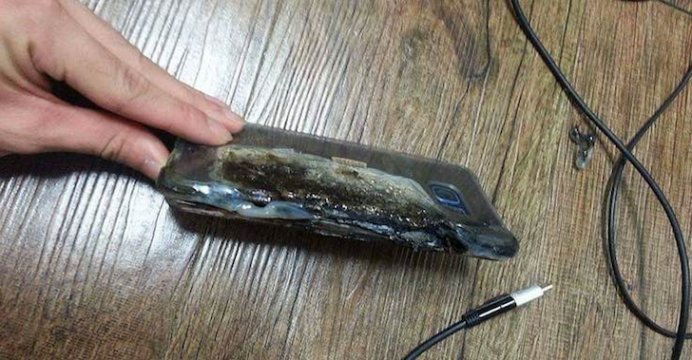 Samsung Electronics is recalling its flagship Galaxy Note 7 smartphone and said that battery problems were behind phones catching fire. The decision follows reports in the US and South Korea of the phone “exploding” during or after charging, reports BBC.

The South Korean company said customers who had already bought the phone would be able to swap it for a new one. Samsung said it had been difficult to work out which phones were affected among the 2.5 million Note 7s sold.

“There was a tiny problem in the manufacturing process, so it was very difficult to figure out,” the president of Samsung’s mobile business Koh Dong-jin told reporters.

“It will cost us so much it makes my heart ache. Nevertheless, the reason we made this decision is because what is most important is customer safety,” he said.

The firm said it would take about two weeks to prepare replacement devices. According to Samsung, the phone has been launched in 10 countries so far but with different companies supplying the batteries. The recall comes just one week ahead of an expected presentation of a new iPhone model from its main rival Apple.

According to CNN, It’s unclear what owners of the phones should do now. The company said it will take about two weeks to prepare the recall, and the date new products will be available will vary by country. People worried about their batteries should contact their nearest Samsung service center, it added.

South Korean news agency Yonhap had previously reported that there have been five claims around the world of Note 7s catching fire while charging. Unverified photos posted on social media showed charred devices.

Samsung, a giant South Korean company, said it had been alerted to 35 claims of faulty phones worldwide. It said it had so far found 24 devices with problems for every million sold.

U.S. mobile networks sell the Galaxy Note 7 for at least $850. At a news conference, company executives declined to comment on exactly how much replacing all the devices would cost.

Samsung shares fell Thursday on reports of problems with the Galaxy Note 7 battery but closed 0.6% higher Friday before the recall was confirmed.

Samsung had the biggest share of the global smartphone market in the three months to June 30, according to research firm IDC. The South Korean company had 22%, ahead of Apple’s 12%.

Samsung benefited from the popularity of the Galaxy S7, IDC said, and the Galaxy Note 7 was expected to keep that momentum going into the second half of the year.

The phone was well received by reviewers, drawing attention to several unique features such as an iris scanner, which allows users to unlock the phone with their eyes.