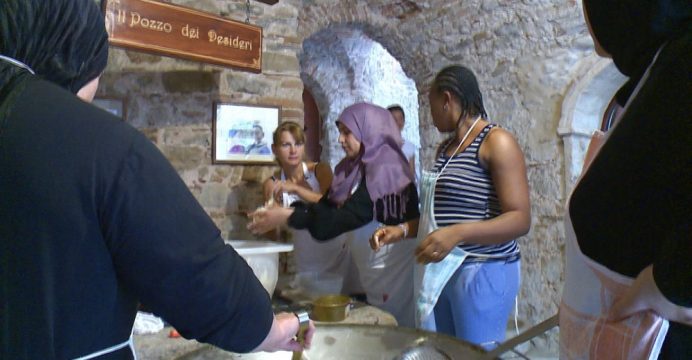 Refugees from Syria resettle in Camini village in southern Italy

Mohamed al-Okla and his wife Amal fled Syria’s civil war with their five children in order to resettle in Italy. Hoping for a fresh start away from the horrors of war, the family has found a place they can call home, reports Aljazeera.

In stark contrast to the transitory way of life in migration centers, the small village of Camini in southern Italy has helped bring a sense of normality to the Syrian family.

“The children are happy here, and so am I,” Mohamed told Al Jazeera. “Here, it’s calm, tranquil, it’s good. We’re now living in a democratic country and, most importantly, there is peace.”

While the continuous influx of refugees is seen as a concern for most European nations, the Camini community has welcomed their arrival as it has helped bring new life to the village.

Half a century ago, hundreds of locals were driven away by poverty and lack of opportunities. But with homes being refurbished and children filling up classrooms, the town in the region of Calabria is undergoing a revival.

Rosaria Zulzolo, who leads the cooperative, appreciates the increased business the inflow of refugees and migrants has brought.

“We never thought it would be a resource for us,” said Zulzolo. “We just wanted to receive people who were running away from war and offer them hospitality.

“And in this hospitality, we saw that shopkeepers were selling more goods, more work was being created.”

Around 105,000 refugees and migrants have reached Italy by boat so far this year, according to data from the International Organization for Migration.

An estimated 2,726 men, women, and children have died over the same period trying to make the journey. The Syrian civil war has left more than 270,000 people dead in the past five years.