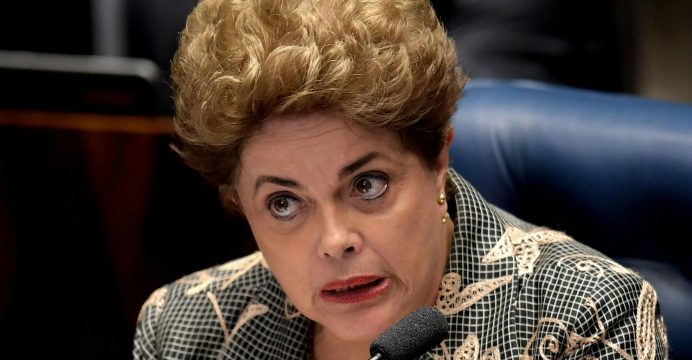 Suspended Brazilian president Dilma Rousseff told senators in emotional testimony at her trial on Monday that voting for her impeachment would amount to a “coup d’etat”, reports BSS.

Declaring her innocence and recalling how she was tortured under Brazil’s military dictatorship in the 1970s, Rousseff warned that Latin America’s biggest country was on the verge of losing its democracy.

“Vote against impeachment, vote for democracy…. Do not accept a coup,” the 68-year-old leftist leader said as she defended herself before senators who are widely expected to remove her from office by Wednesday.

About 2,000 supporters rallied in her support near the Senate building in the capital Brasilia, waving flags — a fraction of the crowds her Workers’ Party has drawn in the past.

Protesters also massed in Rio de Janeiro and in Sao Paulo, where they lit fires and riot police fired tear gas to disperse them.

Brazil’s first woman president is accused of having taken illegal state loans to patch budget holes in 2014, to mask the country’s problems as it slid into its deepest recession in decades.

Momentum to push her out of office is also fueled by deep anger at months of political paralysis and a vast corruption scandal centered on state oil giant Petrobras.

All indications point to the Senate impeaching Rousseff when voting starts Tuesday, ending 13 years of rule by the leftist Workers’ Party.

Her last-minute defense started around 9:30 am (1230 GMT), with scores of senators scheduled to question her. She was still talking and gesturing 12 hours later as the session wore on into the night.

LOOK IN THE EYE

“An unreal Brazil was sold. The unreal numbers led to a loss of confidence among Brazilians and we are facing the worst financial crisis in the history of the country,” Tebet said.

But Rousseff, arguing that the loans were a commonly used fiscal stopgap, said she’d been accused “unjustly and arbitrarily.”

“I’ve come to look your excellencies in the eye to say that I did not commit a crime,” she said in a calm, firm voice from the Senate chamber podium in the capital Brasilia.

There appeared to be little Rousseff could say however to save her presidency. Voting was expected Tuesday, possibly extending into Wednesday. Pro-impeachment senators say they will easily reach the needed two-thirds majority — 54 of 81 senators — to remove her from office.

In that case, Rousseff’s former vice president turned political enemy, Michel Temer, will be confirmed as president until elections in 2018.

Temer, from the center-right PMDB party, has already been acting president since May, using his brief period in power to steer the government rightward. Rousseff has barely double digit approval ratings. But Temer is hardly more popular, according to opinion polls.

While her presidency has been mired in the Petrobras embezzlement and bribery scandal, Rousseff has never been charged with trying to enrich herself — unlike many of her prominent accusers and close allies.

Keeping to his residence while the Senate drama unfolded, Temer greeted members of the Brazilian Olympic team and said he was following proceedings “with complete calm,” Globo news site reported.

Although Rousseff spoke mostly in a measured tone, her voice cracked and she appeared close to tears while recalling her suffering as a young leftist guerrilla and in battling cancer.

“Twice I have seen the face of death close up: when I was tortured for days on end, subjected to abuses that make us doubt humanity and the meaning of life itself, and when a serious and extremely painful illness could have cut short my life,” she said.

“Today I only fear for the death of democracy for which many of us here in this chamber fought.”

The Workers’ Party under Rousseff and her predecessor Luiz Inacio Lula da Silva is credited with raising millions of Brazilians out of poverty. Lula burst into applause in the chamber and chanted: “Dilma, warrior of the Brazilian people!”

Brasilia police said they were preparing for about 10,000 demonstrators Monday and up to 30,000 during the impeachment vote session.

“I am fighting to defend democracy and the dignity of the people,” said retired teacher Marlene Bastos, 65, who was among the demonstrators.

“This has been a persecution against the Workers’ Party, Dilma and the Brazilian people.”