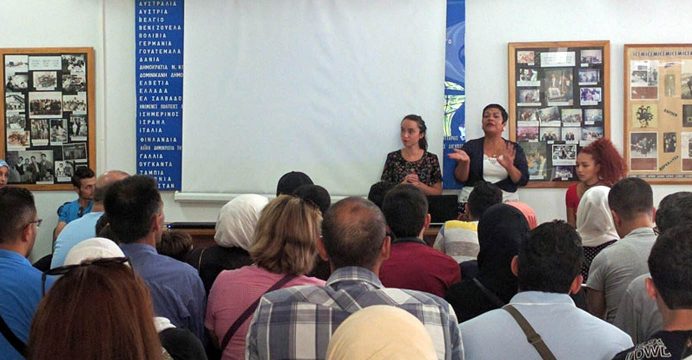 Asylum seekers relocate from Greece to France through EU scheme

A group of 160 asylum seekers left Greece recently and arrived safely in France with IOM’s support under the European Union’s Relocation Programme.

IOM staff accompanied the asylum seekers on the chartered flight from Athens to Lyon, ensuring assistance throughout the journey and safe disembarkation in France.

“France stands as an example today in Europe in meeting the needs of people currently stranded in Greece and in need of protection,” said Besim Ajeti, Head of Operations in IOM Greece, before the flight’s departure.

“IOM in Greece has developed excellent coordination with an equally enthusiastic French liaison team, which has allowed us to respond to the needs of the people that have been accepted to be relocated to France, especially for vulnerable groups such as those with medical needs,” he added.

Before departure, IOM carried out health assessments for the beneficiaries to ensure that they would be able to travel in safety and dignity.

IOM, the French Liaison Officer and the Embassy in Athens also organised a three-day pre-departure orientation programme at IOM’s Athens office to help prepare the group for this life-changing adjustment.

The sessions included a basic introduction to the French language and useful information on their initial post-arrival reception and early integration assistance.

On arrival in France, the beneficiaries are assisted by IOM France and the French Office for Immigration and Integration (OFII), which is in charge of the transport to the reception centers where the asylum seekers are accommodated during the asylum procedure.

The EU relocation programme is being implemented by IOM with the continuing support of the European Commission, European Union Member States and other partners.

Through the programme, IOM provides substantial support to the Government of Greece in relocating asylum seekers in need of international protection from Greece to other EU Member States.

Some 3,386 asylum seekers have been relocated from Greece since the start of the programme in November 2015. Another 548 people are booked for relocation in the coming weeks.

The majority of beneficiaries are asylum seekers from Syria and Iraq who arrived in Greece between September 2015 and 20 March 2016, when the agreement between the EU and Turkey was reached.

IOM welcomes the EU Member States’ participation in the relocation programme as part of their joint efforts to promote solidarity in the best interest of effective migration management, and encourages their continued support and admission of relocation cases.