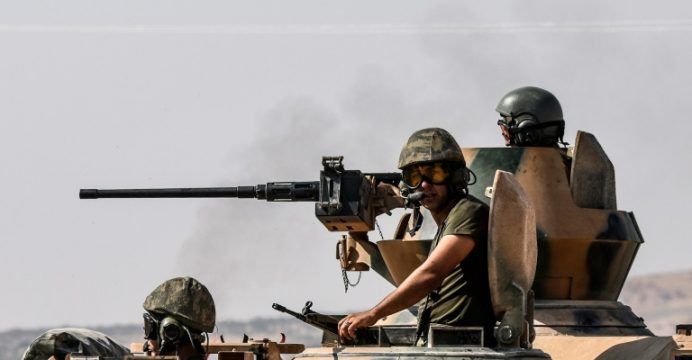 Turkey’s state-run Anadolu news agency said the army had killed 25 Kurdish “terrorists” in air strikes as part of its unprecedented operation inside Syria.

The bombardments came after Ankara suffered its first military fatality since it launched the two-pronged offensive against the Islamic State group and Syrian Kurdish militia inside Syria on Wednesday. 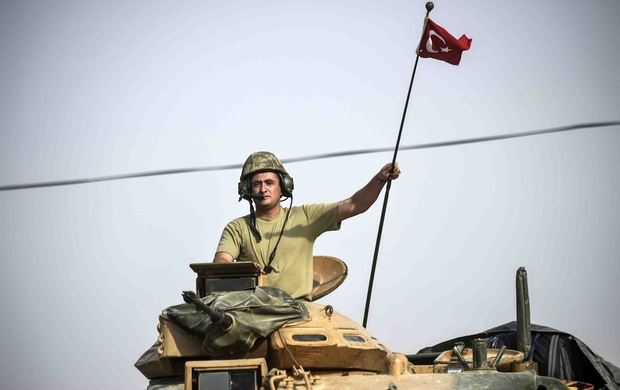 At least 20 civilians were killed and 50 wounded in Turkish artillery fire and air strikes on the village of Jeb el-Kussa early on Sunday, the Syrian Observatory for Human Rights monitoring group said.

Another 20 were killed and 25 wounded, many seriously, in Turkish air strikes near the town of Al-Amarneh, it said. The monitor also said at least four Kurdish fighters had been killed and 15 injured in Turkish bombardment of the two areas. A spokesman for the local Kurdish administration said 75 people had been killed in both villages.

The Britain-based Observatory said the bombardment targeted an area south of the former IS border stronghold of Jarabulus, which Turkish-led forces captured on the first day of the incursion.

Fighting has since intensified south of the town, where clashes erupted between Turkish troops and forces belonging to the Kurdish Democratic Union (PYD) party, which Ankara considers a terrorist group linked with Kurdish militants in Turkey.

US-backed Kurdish forces have also been fighting IS in Syria but Turkey fiercely opposes any move by Kurds to expand into territory lost by the jihadists.

The latest fighting is likely to raise deep concerns for Turkey’s NATO ally the United States, which supports the Kurdish militia — known as the People’s Protection Units (YPG) — as an effective fighting force against IS.

The Turkish soldier was killed and three more wounded on Saturday in a rocket attack by Kurdish militia on two tanks taking part in an offensive against the pro-Kurdish forces south of Jarabulus.

Turkish media named the dead soldier as Ercan Celik, 28, and said a funeral for him would be held on Sunday in Gaziantep.

President Recep Tayyip Erdogan was due to visit the city on Sunday to express condolences for last weekend’s suicide bombing there at a Kurdish wedding that left 54 dead.

Turkey’s NTV television reported that Turkish artillery had struck YPG targets throughout the night and that Turkish warplanes had carried out new bombing sorties on Sunday morning.

Turkish forces carried out their first air strikes on pro-Kurdish positions on Saturday as part of what Ankara is calling “Operation Euphrates Shield”.

Turkey says that the YPG — which it regards as the Syrian branch of the outlawed Kurdistan Workers’ Party (PKK) — has failed to stick to a promise to return across the Euphrates River after advancing west this month despite guarantees given by Washington.

Ankara fears the emergence of a contiguous autonomous Kurdish region in Syria would bolster the PKK rebels across the border in southeast Turkey.

Ankara’s military intervention in Syria has added another dimension to the country’s complex multi-front war, a devastating conflict that has killed more than 290,000 people and forced millions from their homes since it began in March 2011.

Much of the heaviest fighting this summer has focused on second city Aleppo, which is roughly divided between rebel forces and President Bashar al-Assad’s troops.

Global powers have been pushing for 48-hour humanitarian ceasefires in the embattled city and UN Syria envoy Staffan de Mistura has urged warring parties to announce by Sunday whether they will commit to a pause in the fighting.

The UN says it has “pre-positioned” aid to go to the city for some 80,000 people. Russia, which backs Assad’s forces, has endorsed the proposal.

But some rebel groups have rejected the plan unless aid passes through opposition-held areas and the ceasefire applies to other areas of Syria under siege.

Opposition groups have repeatedly called for an end to regime sieges of rebel-held areas, accusing Assad’s government of using “starve or surrender” tactics.

On Saturday, the last rebel fighters were evacuated from the town of Daraya just outside Damascus, under a deal that followed a brutal four-year government siege.

Hundreds of fighters and their families were bused north into rebel-held territory in Idlib province, with other civilians transferred to government territory near Damascus for resettlement.

The Syrian army said it was in complete control of the town, from which roughly 8,000 civilians were due to be evacuated.