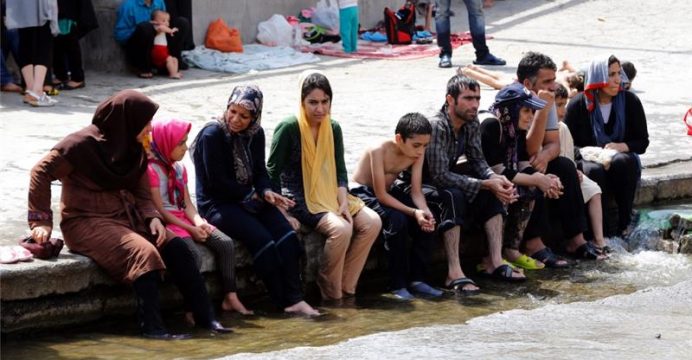 The heatwave in Middle East shows no signs of ending

The heatwave in Iraq is showing no signs of ending as suffering continues for the residents. Kuwait, and Iran but its greatest impact is being felt in Iraq, reports Aljazeera.

The ongoing turmoil in the country has left tens of thousands of people displaced. Many are living in temporary accommodation where lack of air conditioning and intermittent electricity supplies means having to endure temperatures well in excess of what is normal in the late summers.

There has been a marked increase in the number of people admitted to hospitals suffering from heat exhaustion and dehydration. 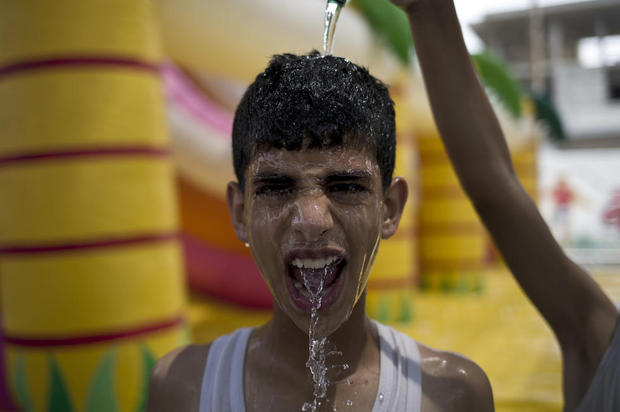 A Palestinian boy reacts as hir friends splash him with water on his head during summer activities organized by the UNRWA in Gaza City on August 3, 2015, during a sweltering heat wave

Farmers have reported that crops are also suffering due to the high temperatures and lack of water for irrigation purpose. Economists estimate that the country’s GDP has shrunk by 20 to 30 percent during this period.

Extreme summer heat is to be expected across much of the region. This sub-tropical desert is the Eastern Hemisphere equivalent of the Mojave Desert, including Death Valley, in California.

Although Death Valley continues to hold the record for the highest observed temperature in the world (56.7C), temperatures in the Middle East do not lag far behind. Temperatures have been enough above the long-term average to warrant it being described as a heatwave.

This is the second phase of the heatwave that began in July. Then, temperatures across Iraq were well in excess of 50C, prompting the closure of many government buildings.

On July 21, a yet-to-be-verified temperature of 54C was recorded in Miribah, Kuwait. If confirmed, this will be the highest temperature recorded in the Eastern Hemisphere.

While Miribah was grabbing the headlines, Basrah, close to the northern end of the Arabian Gulf, recorded a similar temperature on that day. That was during July, the peak of the summer heat.

By mid to late August, temperatures inevitably dip as the sun continues its journey towards the celestial equator. Temperatures in Baghdad, for example, should be dropping back to around 42C.

In the coming days, temperatures could rise further with 50C or more than likely to occur in Basrah. A temperature of 50C is possible during the first couple of days of September.

There is some good news for Baghdad, however, as some respite is likely to arrive next week with temperatures no higher than 43C by Sunday.