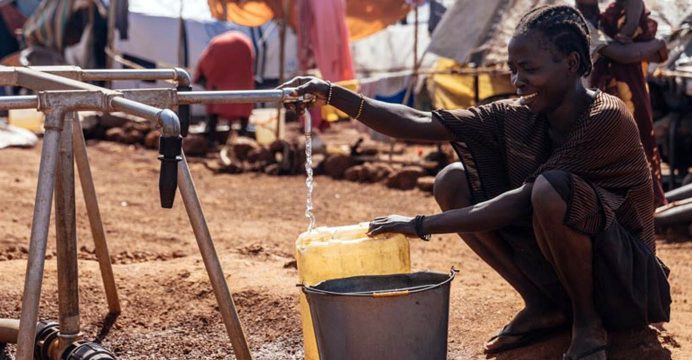 USAID’s Office of US Foreign Disaster Assistance (USAID/OFDA) has contributed an additional USD 17 million to support IOM’s emergency operations across South Sudan, where more than 6.1 million people are in need of humanitarian aid.

With USAID’s support, IOM will continue and expand life-saving aid operations for more than 605,300 displaced and vulnerable individuals at the UN protection of civilians (PoC) sites in Bentiu and Malakal, as well as in Renk and other high-need locations.

“With millions facing severe hunger and displacement, humanitarian needs in South Sudan are the highest they have been since the crisis began. USAID’s contribution and partnership allow IOM to continue lifesaving assistance as we strive to meet the growing needs, which have only been exacerbated by renewed fighting in recent months,” said IOM South Sudan Chief of Mission William Barriga.

Some USD 5.7 million will help IOM ensure that internally displaced persons (IDPs) maintain access to safe drinking water and liveable hygiene and sanitation conditions in the Bentiu and Malakal PoC sites, where 94,800 and 33,000 people, respectively, are currently seeking protection from the ongoing conflict.

An additional USD 5.4 million will enable IOM to continue operating primary health clinics at the Bentiu and Malakal PoC sites and scale up harmonised health and hygiene promotion activities focused on preventing the spread of disease in the congested sites.

A further USD 845,800 will scale up psychosocial support (PSS) activities in the Bentiu PoC site and roll out PSS programming in the Malakal PoC site, where psychosocial and protection needs are high, particularly following the attack on the site in February 2016.

USAID/OFDA is also providing USD 5 million to extend the IOM-managed Rapid Response Fund (RRF) project, which has served as a flexible funding mechanism since 2010 to enable quick disbursement of funds to humanitarian organizations able to respond to emergencies as they arise.

The RRF has played a particularly critical role in responding to the rapidly expanding humanitarian needs in Wau, following the violence that broke out in the area in late June, which displaced more than 80,000 people from their homes.

Since the humanitarian crisis erupted in South Sudan in December 2013, the US government has contributed over USD 1.7 billion in humanitarian funding to support operations across South Sudan and for refugees in neighbouring countries.