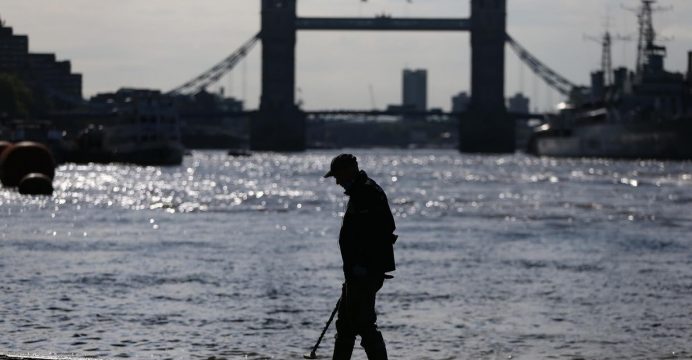 Searching for history along the Thames

A torch on his head, Jason Sandy scours the nighttime London foreshores of the Thames river, searching for objects that could offer a glimpse of life in the British capital hundreds of years ago.

As the occasional party boat passes by, its music blasting and lights flashing, the 42-year-old architect only has a few hours while the tide is low to make his finds ,reports Reuters.

Sandy has been mudlarking for a hobby for the last five years, scouring the river banks for historical artifacts. Some of his finds are so rare they are displayed in museums.

“Over 2,000 years of time, everything has been thrown into the Thames, accidentally lost … dropped so 2,000 years of history are down there,” he said.

“It’s really the thrill of almost like time traveling and knowing that the last person to touch this was from that time period,” he added, describing the feeling of making a find.

Sandy, originally from Chicago, has found numerous artifacts like a Tudor comb, Victorian toothbrush and a Roman women’s hair pin, which the Museum of London dated to AD 43.

Mudlarking is believed to trace its origins to the 18th and 19th century, when scavengers searched the Thames’ shores for items to sell. These days, history and archaeology fans are the ones hoping to find old relics such as coins, ceramics, artifacts or everyday items from across centuries.

They wait for the low tide and then scour specific areas of exposed shores.

“If you’re in a field you could be out all day long, with the river you’re restricted to about two or three hours,” mudlark Nick Stevens said. “Unlike fishing where there’s one of 10 fish that you’re likely to catch, with mudlarking there is an infinite amount of variety in terms of what you could find.”

While many just use the naked eye for their searches, others rely on metal detectors for which a permit from the Port of London Authority is needed. Digging also requires consent.

The select Society of Thames Mudlarks counts just a few dozen members, who have the necessary licenses and can access restricted areas along the river.

Collaborating with the Museum of London, the mudlarks record their finds with the Portable Antiquities Scheme. Any item over 300 years old must be recorded.

“It’s quite exciting to go down to a part of London that is only accessible for a very short amount of time,” Sandy said.

“Thousands of years of London’s history is still waiting to be discovered there on the Thames foreshore.”