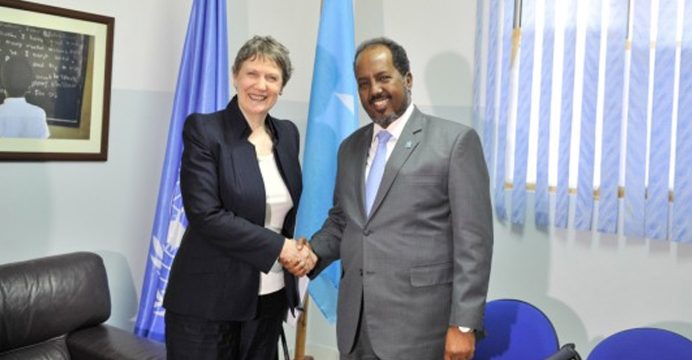 Helen Clark met with Federal President Hassan Sheikh Mohamud, Prime Minister Omar Abdirashid Ali Sharmarke, Speaker of the Federal Parliament Mohamed Sheikh Osman Jawari, and other senior Somali officials in Mogadishu. Among the topics of her discussions were the 2016 electoral process and the upcoming launch of the country’s first national development plan in more than three decades.

“I take away a positive message from my visit about what is being achieved,” she said.

The NDP is due to take effect at the beginning of next year, and builds on the implementation of Somalia’s New Deal Compact launched in 2014. The UN supported the NDP drafting process and an unprecedented series of national consultations on the three-year plan. It will now promote support for its implementation through increased use of existing aid co-ordination mechanisms such as the Somalia Development and Reconstruction Facility.

Helen Clark urged government leaders to support achieving the 30 per cent target for women members in both houses of the country’s next parliament due to be elected later this year. She also met with women leaders, officials of the federal Ministry of Women and Human Rights Development, and a number of goodwill ambassadors appointed by President Hassan Sheikh to promote the women’s parliamentary quota initiative. UNDP is playing an important role in support of the electoral process, and promotes women’s political participation and representation.

The Administrator highlighted the unique partnership which exists between the United Nations Assistance Mission in Somalia (UNSOM) and the resident UN Country Team. She singled out the pivotal role of UNDP in helping UNSOM to deliver on its mandate in areas like state formation, the constitutional review process, rule of law, and the development of institutional capacity.

“The purpose of my visit was to see for myself how UNDP is supporting Somalia to move forward. I am very happy with the leadership and team we have in Somalia, and was pleased to receive very positive feedback about their work from their counterparts in government and civil society,” Helen Clark said.