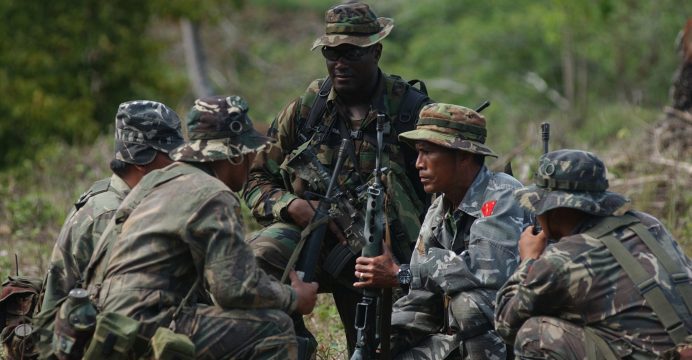 Philippine commandos killed 11 Islamist militants on a remote southern island on Friday, an army spokesman said, stepping up the offensive after President Rodrigo Duterte reiterated his aim to “destroy” one of Asia’s most notorious kidnap gangs.

Major Filemon Tan said dozens of Abu Sayyaf rebels, a small but brutal group affiliated with Islamic State militants in Iraq and Syria, were also wounded in the 45-minute gun battle in the jungle of Jolo island,reports Reuters.

Seventeen commandos were wounded, Tan said, adding the soldiers clashed with about 100 Abu Sayyaf militants holding about 20 hostages, including eight Indonesians, five Malaysians, a Norwegian and a Dutch national.

“The mission is clear. Seek and destroy the Abu Sayyaf,” Tan told reporters. “By all means, that’s what we are doing and we will not stop until it’s done.”

The Abu Sayyaf has dogged successive Philippine governments, entrenching its network with vast sums of ransom money in what has become one of Asia’s most lucrative kidnap rackets.

Security experts say the rebels are motivated less by Islamist ideology and more by the tens of millions of dollars from kidnappings.

Two Canadians were executed this year by the Abu Sayyaf. Last week, two Indonesians escaped captivity but there was speculation the Abu Sayyaf freed them after their families paid their ransoms.