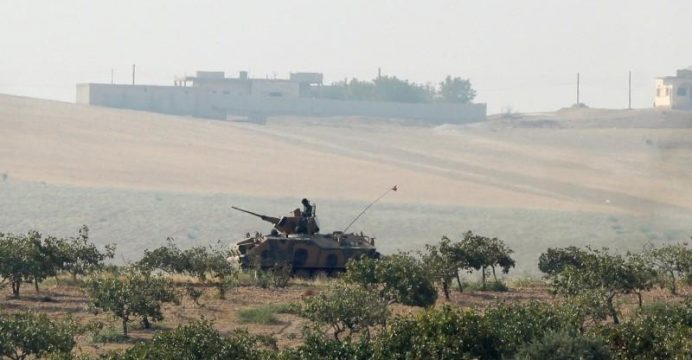 Tensions had flared across the Syria-Turkey border the previous day, with Turkish forces pounding jihadists with artillery strikes following rocket fire from the Syrian town of Jarablus.

“The Turkish Armed Forces and the International Coalition Air Forces have launched a military operation aimed at clearing the district of Jarablus of the province of Aleppo from the terrorist organisation Daesh,” the prime minister’s statement said, using an Arabic acronym for the IS group. 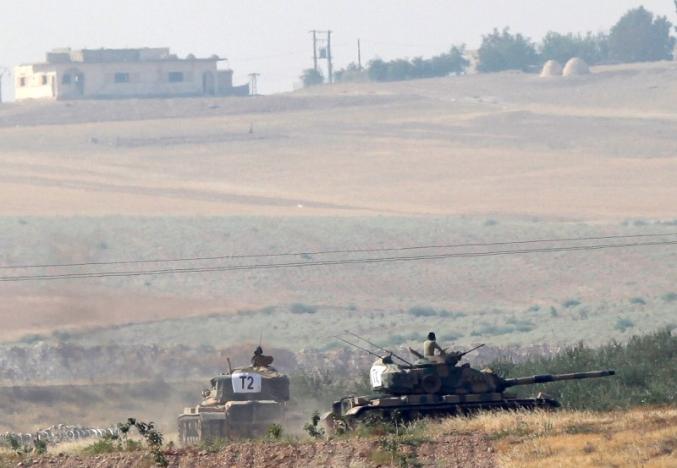 Turkish army tanks are pictured in Karkamis on the Turkish-Syrian border in the southeastern Gaziantep province, Turkey * PHOTO: REUTERS

The state-run news agency Anadolu said the operation began at around 4:00 am local time (0100 GMT). In an earlier interview with private NTV television, Deputy Prime Minister Numan Kurtulmus said Ankara saw Jarablus — which lies opposite the Turkish town of Karkamis — “as a national security matter”.

“What we have said since the beginning is that having Jarablus or any other city held by IS is unacceptable,” he said.

The launch of the operation comes the day US Vice President is due in Ankara to meet Turkey’s leadership, with agreeing on a unified strategy on Syria set to be a crucial issue.

He is by far the highest-ranking Western official to visit Turkey since the coup attempt to unseat President Recep Tayyip Erdogan.

Turkish F-16 jets dropped bombs on IS targets in Jarablus, the private NTV television reported, in the first such assaults since a November crisis with Russia that was sparked when the Turkish air force downed one of Moscow’s warplanes.

Security sources quoted by Turkish television said a small contingent of special forces travelled a few kilometres into Syria to secure the area before a possible operation.

The movements have come at a critical juncture for Turkey in Syria’s five-and-a-half-year war, with signs growing it is on the verge of a landmark policy shift. Ankara has always called for the ouster of President Bashar al-Assad as the key to ending the conflict, putting Turkey at odds with his main supporters Iran and Russia.

However Prime Minister Binali Yildirim at the weekend for the first time acknowledged that Assad was one of the “actors” in Syria and may need to stay on as part of a transition.

Turkey has been shaken by one of the bloodiest years in its modern history, with a string of attacks by IS jihadists and Kurdish militants and the botched July 15 coup.

A Saturday attack in Gaziantep on a Kurdish wedding party for a young couple has horrified the country, with the majority of the 54 victims aged under 18 and including children as young as four.

But there is confusion as to who was behind the attack, with Erdogan initially saying the suicide bomber was a child aged 12-14 acting on the orders of IS.

However, Yildirim on Monday said Turkey still had no clue who carried out the attack and said all “rumours” over the age and affiliation of the bomber should be taken with a pinch of salt.