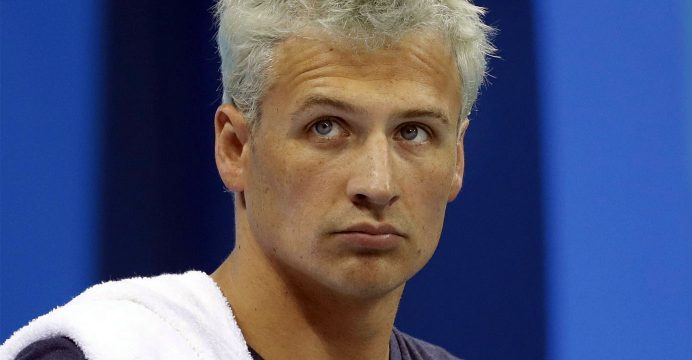 Global swimwear brand Speedo and US fashion label Ralph Lauren topped the list of companies that ended their relationships with the 32-year-old Lochte, with the former noting his actions had not reflected the “values” it wished to promote.

Lochte claimed he and three of his teammates — all of them gold medal winners in Rio — were mugged by robbers pretending to be police after a night out, but the story quickly unraveled as new witness testimony and surveillance video surfaced.

Police said the group had been detained over the vandalization of a gas station bathroom, apparently led by a drunken Lochte — a major embarrassment for Team USA, an Olympic swimming powerhouse.

“Speedo USA today announces the decision to end its sponsorship of Ryan Lochte,” the company said in a statement, noting that the company will donate $50,000 of Lochte’s fees to Save the Children, to go towards helping Brazilian youths.

“While we have enjoyed a winning relationship with Ryan for over a decade and he has been an important member of the Speedo team, we cannot condone behavior that is counter to the values this brand has long stood for,” it said.

“We appreciate his many achievements and hope he moves forward and learns from this experience,” Speedo USA said of Lochte, who has won a total of 12 medals in Olympic competition during his career, six of them gold.

In a statement to E! News, Lochte said he was “grateful for the opportunities” afforded to him by his ties with Speedo — a 10-year deal that was due to end this year, according to ESPN.

Ralph Lauren, which outfitted Team USA for the Olympic opening and closing ceremonies in Rio, said it too was finished with Lochte, noting that their agreement was specific to the Rio Games and his contract would not be renewed.

“Ralph Lauren continues to proudly sponsor the US Olympic and Paralympic Team and the values that its athletes embody,” it added in a statement.

Airweave said on Twitter it was ending its partnership with Lochte, which was also limited to the Rio Olympics.

And Syneron Candela said in a statement to ESPN: “We hold our employees to high standards, and we expect the same of our business partners. We wish Ryan well on his future endeavors and thank him for the time he spent supporting our brand.”

After issuing a written apology that was widely ridiculed online as half-hearted, Lochte admitted in an interview with NBC aired Saturday that he had “left details out” and “overexaggerated some parts of the story.”

He also admitted he was still intoxicated when he gave his initial account of the incident, adding: “I let my team down.”

Following the incident, Lochte flew back to the United States, while the other three — Gunnar Bentz, Jack Conger and Jimmy Feigen — stayed in Brazil.

On Thursday, police released closed-circuit TV footage and other evidence about the events at the gas station.

The athletes, who appeared intoxicated, stopped in a taxi at the gas station to use the bathroom during the early hours of the morning.

Lochte and the others then vandalized the area near the bathroom and, according to the manager, urinated on the walls.

Confronted by a security guard, they tried to leave. When the confrontation escalated, the security guard took out his pistol and made them sit on the ground.

After paying about $50 in compensation for the damage to the station, they left unharmed and returned to the athletes’ village.

“There was no robbery of the kind reported by the athletes,” the head of Rio’s civil police, Fernando Veloso, told a press conference.

He could yet face disciplinary action over the incident — both USA Swimming and the International Olympic Committee could sanction him.