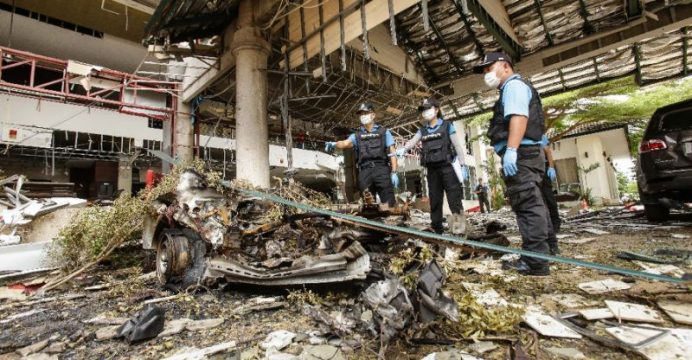 Car Bomb explosion in Thailand kills one and wounded 30

A large car bomb exploded on Wednesday outside a hotel in Thailand’s deep south, killing one and wounding more than 30 in a nation already on edge after a bombing spree that targeted tourist towns, reports BSS.

The latest blast struck before midnight on the outskirts of Pattani, one of three Muslim-majority southern provinces battered by a long-running and shadowy insurgency.

“So far there is one killed and more than 30 injured,” said Major General Thanongsak Wangsupa, Pattani provincial police commander.

“The hotel building was considerably damaged,” he told reporters. 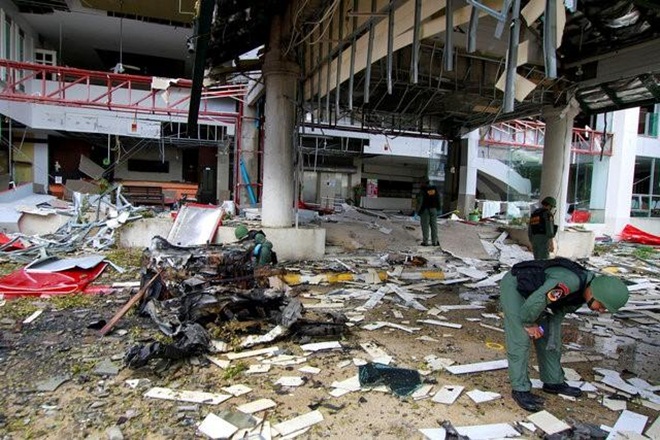 The latest bomb struck shortly before midnight outside a hotel on the outskirts of Pattani, one of three Muslim-majority southern provinces that have been battered by the 12- year insurgency * PHOTO : REUTERS

Pictures showed fires burning on the road outside the hotel, its facade heavily damaged. Nearby a car was destroyed and karaoke bars, massage parlours, and restaurants were also damaged.

Pattani is not popular with tourists, but analysts said the militants were sending a message after the string of coordinated bomb and arson attacks that struck multiple resort towns on August 11-12, leaving four dead and 37 injured.

Those attacks heightened concerns Thailand’s southern insurgency may have spread after years of stalled peace talks — a theory the country’s junta has downplayed given the importance of tourism to the economy. Zachary Abuza, an expert on Southeast Asian militant groups, said the hotel attack was “nothing new” in insurgent tactics.

“But they’re clearly trying to send a signal that with the post Mothers’ Day bombing spree they are able to hit major urban areas,” he told reporters, referring to the tourist town attacks that fell on a Thai national holiday.

Police said in a statement that the Pattani hotel blast was preceded by a smaller bomb at a nearby bar, a so-called “double tap” tactic often adopted by insurgents. No-one was injured in the earlier blast.

A staff member at the town’s hospital said 32 people were injured, five of them critically. All are Thai nationals, the worker added, asking not to be named.

Most embassies warn nationals against all travel to Pattani because of the long-running conflict between the Buddhist-majority state and Muslim rebels seeking greater autonomy.

Thailand annexed the culturally distinct zone bordering Malaysia over a century ago. Near-daily shootings and roadside bombs have left more than 6,500 dead since 2004, most of them civilians.

But the violence has largely remained local and rarely makes international headlines. The kingdom’s junta leadership has denied that the recent tourist town bombings marked an expansion of the insurgency further north.

However, the police investigation into the attacks is increasingly pointing southwards, with Thailand’s top officer on Monday saying most of those behind the blasts were believed to be Muslims who hailed from the deep south.

The rebels never claim their attacks but factions are known to be frustrated with their lack of progress after more than a decade of fighting.

After months of relative calm that saw violence dip to a record low last year, there has been a palpable increase in attacks over the past few months.

The military also stands accused of routinely abusing human rights in the region, including torturing detainees and extrajudicial killings.