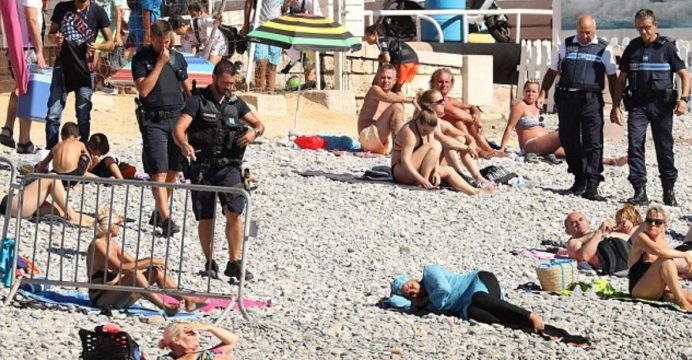 Authorities in several French towns have implemented bans on the garment, which covers the body and head, citing concerns about religious clothing in the wake of recent terrorist killings in the country.

The images of police confronting the woman in Nice on Tuesday show at least four police officers standing over a woman who was resting on the shore at the town’s Promenade des Anglais, the scene of last month’s Bastille Day lorry attack. 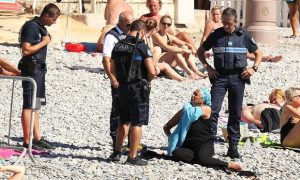 After they arrive, she appears to remove a blue garment, although one of the officers appears to take notes or issue an on-the-spot fine, reports The Guardian..

The photographs emerged as a mother of two also told on Tuesday how she had been fined on the beach in nearby Cannes wearing leggings, a tunic and a headscarf.

Her ticket, seen by French news agency AFP, read that she was not wearing “an outfit respecting good morals and secularism”.

“I was sitting on a beach with my family,” said the 34-year-old who gave only her first name, Siam. “I was wearing a classic headscarf. I had no intention of swimming.”

A witness to the scene, Mathilde Cousin, confirmed the incident. “The saddest thing was that people were shouting ‘go home’, some were applauding the police,” she said. “Her daughter was crying.”

Last week, Nice became the latest French resort to ban the burkini. Using language similar to the bans imposed earlier at other locations, the city barred clothing that “overtly manifests adherence to a religion at a time when France and places of worship are the target of terrorist attacks”.

The Nice ban refers specifically to the truck attack in the city on 14 July that claimed 86 lives, as well as the murder 12 days later of a Catholic priest near the northern city of Rouen.

The ban by several towns will come before France’s highest administrative court on Thursday following an appeal by the Human Rights League, a French NGO. It is challenging the decision by a lower court in Nice, which upheld a ban on the outfit by the town of Villeneuve-Loubet.

Villeneuve-Loubet, just west of Nice, was among the first of 15 towns to ban the burkini, triggering a fierce debate in France and elsewhere about the wearing of the full-body swimsuit, women’s rights and secularism.

A Corsican mayor has also banned burkinis, amid tensions on the island and violent clashes between villagers and three Muslim families. Skirmishes at a beach in the commune of Sisco earlier this month left four people injured and resulted in riot police being brought in to stop a crowd of 200 Corsicans marching into a housing estate with a high population of people of North African origin, shouting “this is our home”.

A police investigation is under way to determine the cause of the violent brawl, although there has been no confirmation from authorities as to whether anyone on the beach was wearing a burkini at the time.

Tensions have risen in the area since the Bastille Day attack in July. Photograph: Vantagenews.com
Nevertheless the local Socialist mayor, Ange-Pierre Vivoni, banned the garments, describing the measure as necessary to “protect the population”.

The Nice tribunal ruled on Monday that the ban in Villeneuve-Loubet was “necessary, appropriate and proportionate” to prevent public disorder after a succession of jihadi attacks in France.

The burkini was “liable to offend the religious convictions or (religious) non-convictions of other users of the beach,” and “be felt as a defiance or a provocation exacerbating tensions felt by” the community, it added.

The ruling by the state council, France’s highest administrative court, will provide a legal precedent for towns to follow around the country.