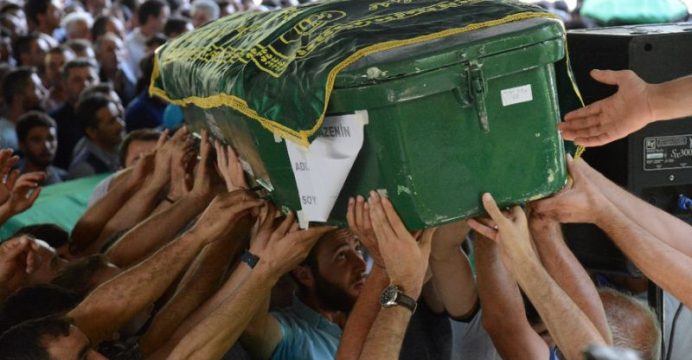 Turkey scrambles to ascertain the identity of child suicide bomber

Turkish authorities were on Monday scrambling to ascertain the identity of a child suicide bomber acting on the orders of Islamic State (IS) jihadists who killed 51 people at a crowded Kurdish wedding, reports BSS.

President Recep Tayyip Erdogan said that the bomber at the street wedding late Saturday in the city of Gaziantep close to Syria was aged “between 12 and 14” and those initial findings showed, it had been “perpetrated by Daesh (IS)”.

Media said the majority of those dead were children or teenagers, with 29 of the 44 victims identified so far aged under 18. At least 22 victims were under 14, a Turkish official added. 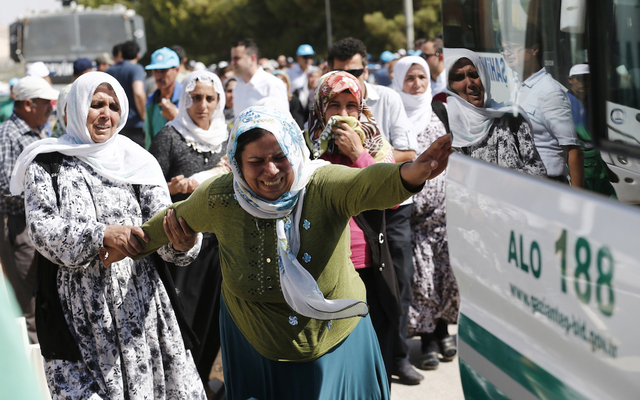 A relative (C) of Kumri Ilter, who was killed in a bomb attack on August 20, 2016, is overcome by emotions as a hearse (R) carrying the coffin leaves after a funeral ceremony in Gaziantep, Turkey

There were no further details on the bomber’s identity, but Erdogan said IS had been trying to “position itself” in Gaziantep which lies just 60 kilometres (37 miles) north of Syria and is a major hub for refugees from the over five-year civil war.

The Hurriyet daily said that DNA tests were under way to ascertain the identity, nationality, and gender of the bomber.

It is possible that the bomber had come over the border from Syria but IS is also known to have built homegrown cells inside Turkey in Gaziantep and even Istanbul, wrote its well-connected columnist Abdulkadir Selvi.

He said Turkish security forces believed that attack had been timed as retaliation by jihadists for offensives both by Kurdish militias and pro-Ankara Syrian opposition forces against IS in Syria.

“There’s a fight against IS but we are paying the price,” he wrote.

The leader of the pro-Kurdish Peoples’ Democratic Party (HDP) Selahattin Demirtas said in a statement that “all of those killed were Kurds”.

The bride and groom — a couple from the strongly Kurdish region of Siirt to the southeast — were rushed to hospital but not seriously wounded.

The attack followed a string of strikes blamed on IS and Kurdish militants in the last months but was the deadliest so far this year and first significant jihadist action in Turkey since the failed July 15 coup.

Hurriyet said the type of bomb used — stuffed with scraps of metal — was similar to the explosives used in previous suicide bombings against pro-Kurdish gatherings blamed on IS in the border town of Suruc and at Ankara train station last year.

All 44 victims identified so far were laid to rest in harrowing ceremonies in Gazinantep on Sunday with relatives throwing themselves on the coffins in desperation, an AFP correspondent said.

The hillside graveyard was pock-marked before the ceremony with the holes of dozens of freshly dug graves for the victims.