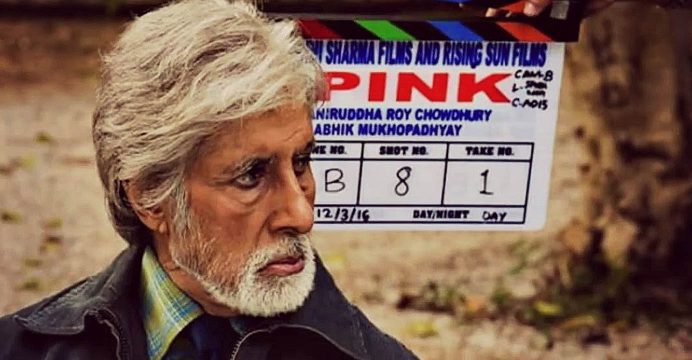 “Pink is not a film about rape” says Amitabh Bachchan

Megastar Amitabh Bachchan who will be seen playing a lawyer in Shoojit Sarkar’s upcoming film ‘Pink’ said the film is not about rape but the situations that exist today, reports Bollyspice.

“I think that the film talks about the current situation especially, for the younger generation. The story is based in Delhi and I just want to make it clear that Pinkisn’t about rape but it is about circumstances that exist in the city of Delhi and most part of the country,” he said at the ‘Jeeney De Mujhe’ song launch of the film.

“There are very strong statements you must have seen in that trial we had in the trailer. It’s just a glimpse, that what kind of language and thoughts that have been expressed. I want you to know that for me personally it is a film that I’ve great belief…

“I hope after watching the film somewhere you will sit back and think… I always believe women in our country are half of the strength and they must have their dignity in their walks of life,” he said.

About the first song of the film, the ‘Piku’ actor said, ‘Jeeney De Mujhe is a song of liberation particularly for the young girls.”

Pink revolves around three girls who were trapped in a criminal case. They are tried in the court for an attempt to murder case and defaming some men.

The crime thriller stars Amitabh Bachchan, Taapsee Pannu, Kirti Kulhari and Andrea Taring in lead roles and is scheduled to release on September 16.