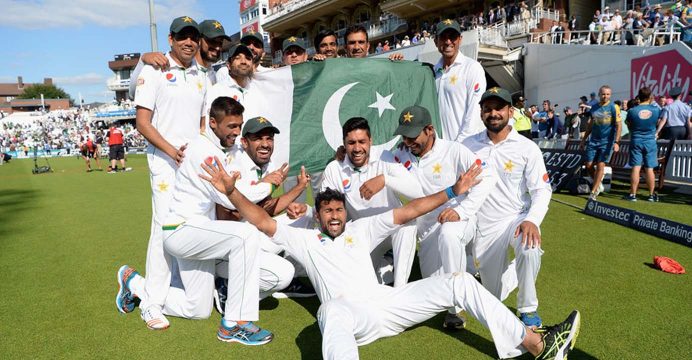 Pakistan supplanted arch-rivals India to become the world’s number one Test side on Monday for the first time since the International Cricket Council (ICC) introduced the rankings system in 2003.

A waterlogged outfield in Trinidad forced a draw in the fourth and final Test between the West Indies and India, a match the tourists had to win to hold onto top spot.

Pakistan, who play their home games in the United Arab Emirates, won the fourth and final Test of their recent series in England to seal a 2-2 draw.

Pakistan is only the fifth team after Australia, England, India and South Africa to top the rankings.

The top ranking is also a personal achievement for 42-year-old Pakistan captain Misbah-ul-Haq, who took charge of the team two months after the 2010 spot-fixing scandal in England which resulted in five-year bans for then skipper Salman Butt and seam bowlers Mohammad Asif and Mohammad Amir.

Pakistan has played in the UAE since a terrorist attack on the Sri Lankan team bus in Lahore in March 2009.

Misbah was delighted to become the first man to lead Pakistan to the top of the Test rankings.

“There is no greater feeling than to achieve the number-one ranking in the most traditional and purest format of the sport. This is what cricketers play for and want to achieve in their careers,” he said.

“Number-one ranking is a reward for something we had planned as a group a few years ago and have worked extremely hard to achieve it. To top the Test table, which boasts some of the best sides and players, is something to be very proud of.

“I want to compliment everyone who has been involved in the process, including all the players, the support personnel, the management, as well as our loyal fans and followers who remained committed to us and continued to back and support the side through the good and not-so-good days.”

Next up for Pakistan is a ‘home’ series in the UAE against the struggling West Indies in October, followed by more difficult examinations of their credentials in New Zealand and Australia.

“For us, the number-one ranking is not a destination but part of a journey. Our long-term objective and strategy are to remain competitive, continue to challenge the top sides with good cricket and once again become the most followed side like the Pakistan teams of yesteryears,” Misbah added.

“Misbah and his side deserve our heartiest congratulations. The number-one ranking is well deserved and a testament to the quality of cricket the team has consistently played over the past few years,” he said.

Pakistan will be presented with the ICC Test Championship mace in the next few days.