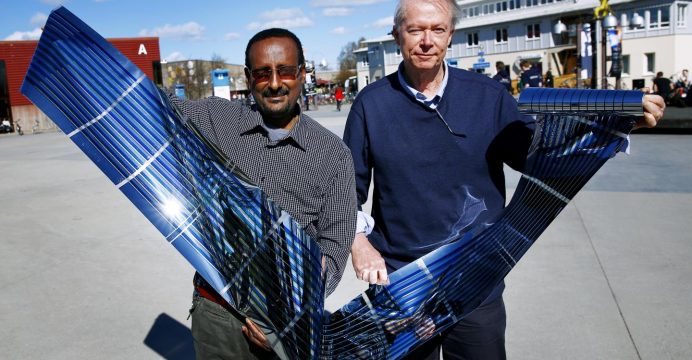 New research results reported by an international team led by the National Institute of Standards and Technology (NIST) indicate that the “sweet spot” for mass-producing polymer solar cells — a tantalizing prospect for decades — may be far larger than dictated by the conventional wisdom. In experiments using a mock-up of a high-volume, roll-to-roll processing method, the researchers produced polymer-based solar cells with a “power conversion efficiency” of better than 9.5 percent, just shy of the minimum commercial target of 10 percent, reports Science Daily.

That’s almost as good as the small-batch devices made in the lab with spin-coating, a method that produces high-quality films in the laboratory but is commercially impractical since it wastes up to 90 percent of the initial ink.

Somewhat surprising to the researchers, their mass-produced versions exhibited molecular packing and texture that only slightly resembled that of lab-made varieties, which at their best convert about 11 percent of incident sunlight into electrical energy.

“The ‘rule of thumb’ has been that high-volume polymer solar cells should look just like those made in the lab in terms of structure, organization and shape at the nanometer scale,” said Lee Richter, a NIST physicist who works on functional polymers. “Our experiments indicate that the requirements are much more flexible than assumed, allowing for greater structural variability without significantly sacrificing conversion efficiency.”

“Efficient roll-to-roll fabrication is key to achieving the low-cost, high-volume production that would enable photovoltaics to scale to a significant fraction of global energy production,” explained He Yan, a collaborator from Hong Kong University of Science and Technology.

The team experimented with a coating material composed of a fluorinated polymer and a fullerene (also known as a “buckyball”). Going by the technical name PffBT4T-2OD, the polymer is attractive for scaled production — achieving a reported power conversion efficiency of more than 11 percent. Importantly, it can be applied in relatively thick layers — conducive to roll-to-roll processing.

However, the top-performing solar cells were produced with the spin-coating method, a small-batch process. In spin coating, the fluid is dispensed onto the center of a disk or other substrate, which rotates to spread the material until the desired coating thickness is achieved. Besides generating lots of waste, the process is piecemeal — rather than continuous — and substrate size is limited.

So the research team opted to test commercially relevant coating methods, especially since PffBT4T-2OD can be applied in relatively thick layers of 250 nanometers and more, or roughly the size of a large virus. They started with blade-coating — akin to holding a knife edge at a fraction of a hair’s breadth above a treated glass substrate as it slides by, painting the PffBT4T-2OD onto the substrate.

A series of X-ray-based measurements revealed that the temperature at which the PffBT4T-2OD was applied and dried significantly influenced the resultant coating’s material structure — especially the orientation, spacing and distribution of the crystals that formed.

The substrates blade-coated at 90 degrees Celsius (194 degrees F) were the highest performing, achieving power conversion efficiencies that topped 9.5 percent. Surprisingly, at the nanometer level, the end products differed significantly from the spin-coated “champion” devices made in the lab. Detailed real-time measurements during both blade-coating and spin-coating revealed the different structures arose from the rapid cooling during spin-coating versus the constant temperature during blade-coating.

“Real-time measurements were critical to developing a proper understanding of the film formation kinetics and ultimate optimization,” said Aram Amassian, a collaborator from Saudi Arabia’s King Abdullah University of Science and Technology.

Encouraged by the results, the team performed preliminary measurements of PffBT4T-2OD coating formed on the surface of a flexible plastic sheet. The coating was applied on NIST’s slot-die roll-to-roll coating line, directly mimicking large-scale production. Measurements confirmed that the material structures made with blade-coating and those made with slot-die-coating were nearly identical when processed at the same temperatures.

“It’s clear that the type of processing method used influences the shape of the domains and their size distribution in the final coating, but these distinctly different morphologies do not necessarily undermine performance,” said Harald Ade, a collaborator from North Carolina State University. “We think these findings provide important clues for designing polymer solar cells optimized for roll-to-roll processing.”