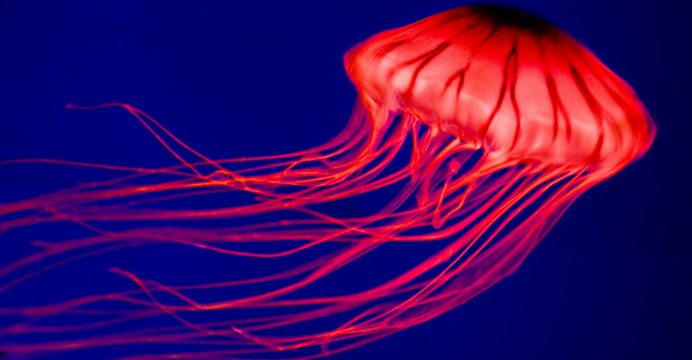 Safer lasers to map your cells could soon be in the offing – all thanks to the humble jellyfish.

Conventional lasers, like the pointer you might use to entertain your cat, produce light by emitting identical photons after they have bounced around inside a cavity. But scaling these up requires lots of energy.

Another type of laser – called a polariton laser – works by passing photons back and forth between excited molecules. Unlike in conventional lasers, the photons are released and reabsorbed within the device itself before zooming out as laser light.  These can use less energy than conventional lasers, so in theory could lead to more efficient optical communications or medical lasers that are less destructive to living tissue, reports New Scientist. But there’s a problem: most polariton lasers only work well at extremely low temperatures. Switching the light-producing molecules to ones that operate at room temperature could make them more practical, says Malte Gather at the University of St. Andrews, UK. But the few materials that work at room temperature have light-emitting molecules that sit too close together, interfering with one another instead of producing laser light.

So Gather turned to an unusual solution: barrel-shaped fluorescent proteins engineered from jellyfish DNA. Each protein’s cylindrical shell encloses a component that emits light, and keeps those molecules from getting too cosy and interfering with one another.

“To me it looked like something that could be useful,” says Gather. Previously, his team had built a moreconventional laser out of green fluorescent protein, but had never built a protein-based polariton laser.

To build their laser, Gather and his colleagues sandwiched a thin film of the fluorescent protein between two mirrors. Activating the light-emitting molecules with a pulse of blue light from an external laser successfully coaxed laser light from the proteins.

The laser might someday go back to its biological roots – it could be embedded within cells and used like a beacon to mark and track them by doctors or researchers.