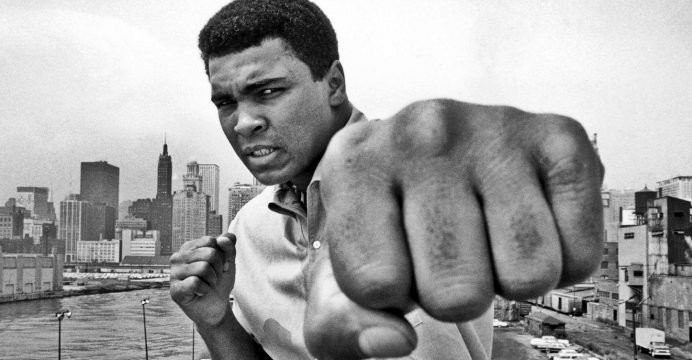 Muhammad Ali’s 1974 WBC heavyweight championship boxing belt and a handwritten letter about his conversion to Islam are among items that will hit the auction block in September, in the biggest such sale since Ali’s death in June.

Heritage Auctions said on Friday that the auction will include the trunks Ali wore for his “Rumble in the Jungle” victory over George Foreman in Zaire in 1974. The gloves worn by Sonny Liston when he lost his title to Ali in 1964 are also among 79 lots in the Sept. 10 auction, reports Reuters.

Ali’s 1964 letter to Life magazine, in which he talks about his conversion to Islam and changing his Cassius Clay birth name, is expected to fetch upwards of $100,000, the Dallas-based auction house said. The one-time Christian Baptist became the most famous convert to Islam in American history when he announced he had joined the Black Muslim movement under the guidance of Malcolm X.

Kathleen Guzman, managing director of Heritage Auctions, said the Feb. 18, 1964 letter followed an interview the boxer had done the same day with Life magazine announcing he was changing his name.

“The editors, especially Jack McDermott, were worried that he would disavow saying that when the actual Life magazine article came out. So he ripped off a piece of paper and had him (Ali) sign an affidavit that said clearly he was changing his name,” Guzman said.

Heritage said the World Boxing Council belt is the first of those won by the three-time world heavyweight champion to come to auction, and is expected to sell for some $600,000.

Ali’s death on June 4 at age 74, after a long battle with Parkinson’s disease, prompted an outpouring of grief and tributes worldwide, culminating in an elaborate public funeral in his Louisville, Kentucky hometown.

“With the recent passing of Muhammad Ali, we have received telephone calls from collectors all over the world seeking important pieces from his life and career,” said Chris Ivy, director of Heritage Sports Collectibles.

Heritage Auctions said most of the items came from collectors, with nothing coming from Ali’s family, who have a number of significant artifacts in their keeping.

Earlier this month, Ali’s fight-worn boxing gloves from his famed 1971 encounter with Joe Frazier sold for $606,000 at a different auction house.