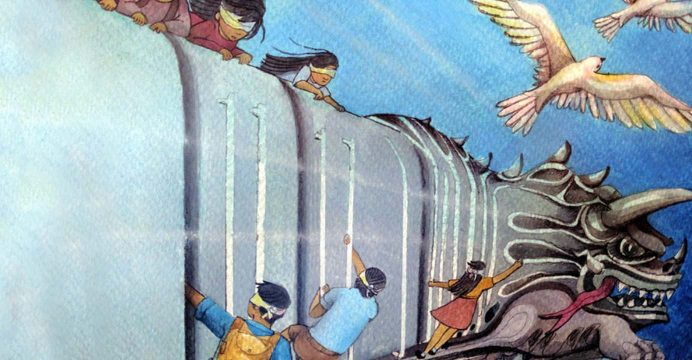 Stories of migrant children in mesoamerica

On Wednesday (17/8) IOM, in partnership with the Government of Guatemala, published: “Paths of Light and Shadow: Stories of migrant children and adolescents.” The book comprises 16 illustrated stories based on the true accounts of Central American girls and boys narrating their perilous journeys to the United States.

Some four million Central Americans live outside their countries of origin, representing 8 percent of the region’s total population. In recent years, the migration of children and adolescents has grown exponentially. In 2014, 68,541 unaccompanied minors were apprehended on the southern border of the United States. In 2016, 43,309 unaccompanied minors have been intercepted so far.

“Until you live it, you can’t believe it. I was among the bold ones to ride “The Beast” (train). But I was also one of the luckier ones. I did not die, did not lose any body parts, despite witnessing terror,” related Lucas, one of the boys.

While the great risks these children face along their irregular migration routes from Central America and Mexico to the United States are understood, the traumatic circumstances which lead them to embark on these dangerous journeys are less well-known.

The book is part of the IOM-supported community campaign, InformArte en Movimiento. Through art and culture, the initiative seeks to raise awareness of the risks of irregular migration. These include human trafficking, kidnapping and sexual violence, to which migrants, and particularly children and youth, are often exposed.

It also provides information on migrants’ rights and resources of support and assistance. The campaign is currently being implemented in eight communities characterized as having high rates of migration. It aims to directly reach at least 2,200 people with messages of prevention and protection conveyed through art and film festivals, mural paintings, anti-trafficking marches, community and social networking, and printed informational materials.

The publication was launched at the closing of the Regional Workshop on Technical Training for the Integral Protection of Children and Adolescents in the Context of Migration in Guatemala. The workshop brought together over 50 representatives of institutions linked to education, health, children, adolescents and migration from the member countries of the Regional Conference on Migration (Puebla Process).

“Through Paths of Light and Shadow, we want to raise awareness and invite reflection on the situation facing children and youth in Central America. It is hoped that this book will become a supporting material for capacity building of staff from government institutions and civil society in the region, helping to draw attention to the complexity of the issue and recognizing that behind every story is a person who deserves protection,” said program coordinator Alexandra Bonnie.

The Mesoamerica Program, under which these initiatives were developed, is implemented by IOM with funding from US State Department’s Bureau of Population, Refugees, and Migration. It seeks to strengthen the capacities of governments and communities in the region to protect and assist migrants in vulnerable situations.