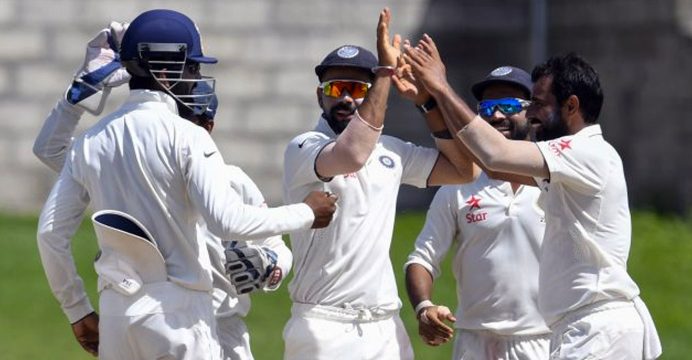 Australia has conceded its number-one ranking to India after Sri Lanka made a clean sweep of the three-Test series in Colombo on Wednesday.

Australia had arrived in Colombo in number-one position on 118 points. But following loses by 106 runs in Pallekele, 229 runs in Galle and 163 runs in Colombo, Australia has joined England on 108 points but is ranked above Alastair Cook’s side, while Sri Lanka has jumped to 95 points.

Australia’s drop means India has become the number-one ranked side on the MRF Tyres ICC Test Team Rankings, while Pakistan has moved into second position – just one point behind.

India had started the year as the top-ranked side before Australia reclaimed the position following its 2-0 win over New Zealand in New Zealand.

For Pakistan, this is the second time in less than a year that it has peaked to number-two position. After defeating England by 2-0 last year in the United Arab Emirates, Pakistan had risen to the second position for the first time since the current rankings system was introduced in 2003.

To retain the number-one position, India will now have to win the fourth and final Test of the four-Test series against the West Indies, which begins in Port of Spain on Thursday, 18 August. India’s failure to win the Test will mean Pakistan will become the number-one ranked side for the first time.

If India wins the fourth Test, then it will finish on 112 points – one ahead of Pakistan – but it will end on 110 points if the Test is drawn or on 108 points in fourth place in the case of West Indies earning a consolation win.

As regards Sri Lanka, it has been a magnificent effort by Aneglo Mathews’ side. It had entered the series in seventh position on 85 points, but has climbed to sixth position after earning 10 points.