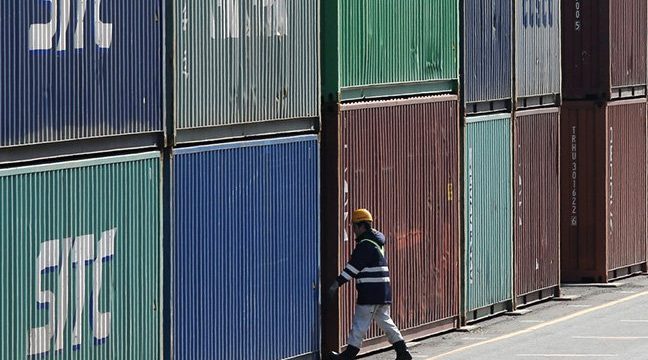 Japan’s exports in July suffered their sharpest monthly fall in seven years, data showed on Thursday, as a surging yen clouds the country’s trade picture, with shipments of cars, ships and steel all tumbling, reports BSS.

The gloomy export figures come despite Japan logging a bigger-than-expected trade surplus as imports also dropped at their fastest rate since 2009.

The finance ministry said the value of exports last month fell 14 percent from a year earlier, the 10th straight monthly fall, while imports dropped nearly 25 percent, leaving Japan with a trade surplus of 513 billion yen ($5.1 billion).
That reversed a year-earlier deficit and was bigger than the 273.2 billion yen surplus expected by economists. But Thursday’s export data are the latest reminder that Tokyo’s policy remedies for stoking growth in the world’s number three economy have failed to gain traction.

Japan’s major exporters have seen their bottom line dented by a sharp rally in the yen, which makes them less competitive overseas and shrinks the value of repatriated profits.

Wild volatility on global financial markets since the start of the year and Britain’s shock vote to leave the European Union have stoked demand for Japan’s currency, which is seen as a safe investment in times of turmoil.

“Movements in trade values continue to reflect the plunge in import and export prices over the past year,” Marcel Thieliant from research house Capital Economics said in a commentary.

“This is mostly the result of the stronger exchange rate, as the majority of both imports and exports are invoiced in foreign currency rather than in yen.

“By contrast, the drag from cheaper energy costs on import prices has started to fade.”

The 2011 Fukushima nuclear disaster forced Japan to shut down its nuclear reactors and turn to pricey fossil fuels to plug the gap.

That sent energy import bills soaring and led to a string of trade deficits, but falling energy prices have eased the pain in the past year.

Japan’s shipments to the United States, China and European Union all declined.  Among the declines last month, vehicle shipments fell 11.5 percent, but analysts said they may rebound.

“US new vehicle sales are likely to stay at a high level, which should put Japanese auto exports on a solid footing.”