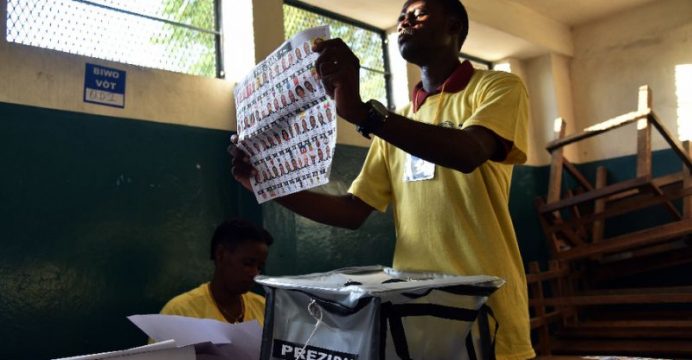 The Provisional Electoral Council said that in the October 9 election all Haitians will be required to cast their ballots where they are registered to vote and people working the polling places will receive more comprehensive training.

Haiti has been mired in political crisis since the results of the October 25, 2015 presidential elections were annulled because of massive fraud.

One key part of the problem was that some Haitians could vote wherever they wanted: political parties could designate individuals to survey the operations, and those people were able to vote anywhere using special “access cards.”

Election authorities determined that more than 910,000 polling access cards had been trafficked, out of the 1.5 million votes cast last year.

“Floating votes will no longer be allowed. Everyone must vote based on a list where the person’s name is found and by presenting an election identification card,” Leopold Berlanger, head of the electoral council, said in an interview Wednesday.

Under normal circumstances Haitian citizens must vote where they are registered using their national identification card.

Berlanger also blamed a lack of training, explaining that in the past, poll workers received preparation for a day or less, contributing to human errors in the election process.

“Now it will be four or five days, with an improved program that includes practice runs of the tasks needed for the day of the vote,” he said.

Faced with national skepticism about the integrity of elections, the electoral council also unveiled a detailed $55 million budget for the vote — a first for the poorest country in the Americas — as the council seeks to provide greater transparency.

“The election must become an institutionalized norm in Haiti and stop being a project or an initiative undertaken somewhat under pressure from the international community,” Berlanger said.

The council chief acknowledged that international players, particularly the United Nations could again provide logistical and security support for the organization of the elections, but that foreign meddling in the vote would be unacceptable.

“Those who are chosen by the people will be elected. The others should be satisfied if they are not the people’s choice. That should be the reality and nothing else,” he said.

Foreign donors bankrolled much of last year’s vote, and the international community has voiced concern that starting from scratch will have serious financial consequences for the country.

Haiti has been in a power vacuum since acting president Jocelerme Privert’s mandate ended in June without a chosen successor.

Parliament had elected Privert in February for a 120-day term when Haiti’s previous president, Michel Martelly, left office without a replacement.

Last October’s top presidential finisher Jovenel Moise, Martelly’s hand-picked candidate, is among the contenders signed up for the October vote.