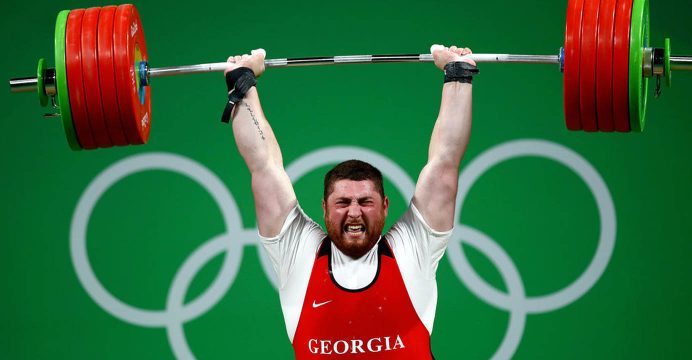 Three world and Olympic records fell and an Olympic champion was deposed on the final night of the Rio 2016 weightlifting tournament on 16 august.

Lasha Talakhadze of Georgia took the men’s +105kg gold medal and, along with compatriot and bronze medallist Irakli Turmanidze, delivered Georgia’s third and fourth ever medals in Olympic weightlifting. Their efforts were split by silver medallist Gor Minasyan, who lifted Armenia’s second silver medal of the tournament.

London 2012 Olympic Games champion Behdad Salimikordasiabi of Iran was also a medal contender but failed to finish because of a jury overrule on his final clean and jerk attempt. The contest had started well for Salimikordasiabi, who lifted 211kg with his second snatch attempt – just 1kg short of the Olympic record – before Talakhadze threw down the gauntlet with a 215kg lift.

Less than 90 seconds later, however, Salimikordasiabi hoisted 216kg to set a new world mark and lead the field going into the clean and jerk. Two failed clean and jerk lifts of 245kg were followed by three white lights at that weight only for his successful lift to be overruled by all five members of the jury because the Iranian’s left arm was deemed to be not straight.

That left Talakhadze to claim the Olympic gold with a 473kg total, eclipsing the 472kg world record mark of another Iranian, Hossein Rezazadeh, set 16 years ago at the Sydney Games. Overall Talakhadze made six good lifts, just as he had done in winning the European title in April.

Talakhadze became the second athlete from Georgia to win a gold medal in weightlifting after Georgi Asanidze, who won gold at the Athens 2004 Olympic Games in the men’s 85kg event. With Turmanidze claiming bronze, this was the first time in Olympic history that two athletes from Georgia had shared the same podium in any sport.

An ecstatic Talakhadze said: “I cannot really take in the situation right now. It was a special moment, especially because there were two Georgians on the podium together.” On beating the world total record of 472kg, he added: “I hope that this record stands and if it’s bettered, it’s bettered by me, although if somebody else does it then it’s OK with me, too.”

Silver medallist Minasyan finished 22kg behind Talakhadze, with Turmanidze third on 448kg. Brazil’s sole representative in the event, Fernando Saraiva Reis, sent the crowd into a frenzy whenever he approached the bar and will be happy with his fifth placing against such quality opposition.