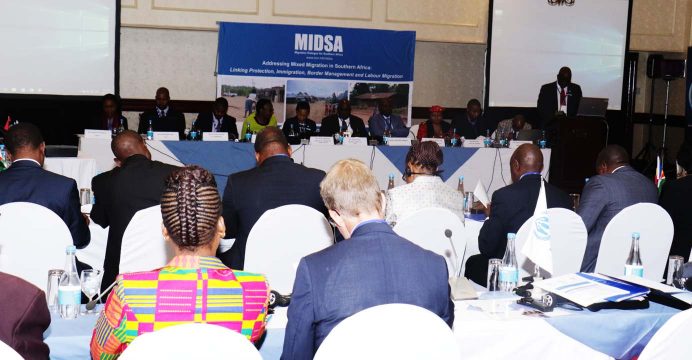 The conference, which started today (16/8), is in partnership with the Government of Botswana, the Southern African Development Community (SADC) Secretariat, the United Nations High Commissioner for Refugees (UNHCR), the United Nations Office on Drugs and Crime (UNODC) and Save the Children.

Participants – mostly senior government officials responsible for Home Affairs and Labour in the 15 SADC Member States – will deliberate on regional efforts to improve the region’s coordinated response to mixed and irregular migration.

Last year’s MIDSA resulted in a regional action plan to address mixed migration in the region at Ministerial level with four thematic areas prioritized for action: the protection of unaccompanied migrant children, statelessness, alternatives to detention and voluntary return.

This year’s theme is Addressing Mixed Migration in Southern Africa: Linking protection, Immigration, Border Management and Labour Migration. The focus will be on assessing the implementation of recommendations from the Ministerial MIDSA of 2015.

The Southern Africa region has seen a rise in recent years in ‘mixed migration’, particularly coming from the East and Horn of Africa, the Great Lakes Region and countries in the SADC region itself.

Large mixed migratory groups, pushed by war, lack of protection, economic disparity or hope for better livelihood opportunities, have been moving south, with many countries in the SADC region frequently used as transit/rest stops.

Most of the individuals on the move are trying to reach South Africa. In the past few years, IOM has identified an increasing number of unaccompanied migrant children among them.

While legal travel documents such as passports are required to facilitate part of the trip, many migrants also use fraudulent or fraudulently obtained documents to enter countries of destination.

Extensive, porous and unmanaged borders – many of which lack the basic infrastructure, human resources and equipment to fully function – exacerbate the situation. Corruption at borders and check points further enables and facilitates the passage of undocumented migrants.

“The world is witnessing an unprecedented level of mobility since the Second World War. Migration has become a central socio political theme across the world; so much so that it is reflected in the (UN) Sustainable Development Goals (SDGs) and Africa’s own Agenda 2063,” said IOM Regional Director for Southern Africa Josiah Ogina.

He recalled that the Regional Action Plan to address mixed migration was adopted at the Ministerial MIDSA last year and the SADC Labour Migration Action Plan was also adopted at a previous MIDSA. He urged for concerted efforts for the plans to come alive and serve their purpose.

“There is need for greater emphasis on interventions on border management which facilitate the legal and orderly movement or persons at borders, while addressing the legitimate security concerns of states,” he noted.

The conference is expected to build consensus on steps that need to be taken to advance the implementation of the two regional action plans both at regional and national levels. SADC Member States will also assess efforts that contribute to improved border management and labour migration in the region.