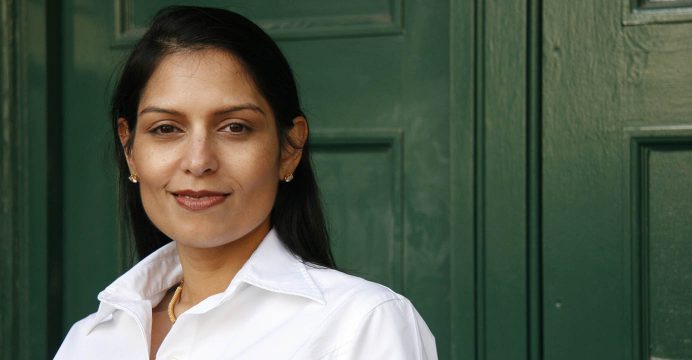 Priti Patel hails strategic partnership between the UK and India

The UK and India are deepening their strategic partnership in areas such as financial services, investment and skills-sharing to benefit both economies, International Development Secretary Priti Patel said today at the end of a three day visit to the country.

Home to over a billion people, India is projected to become the world’s third largest economy by 2050. As it becomes a global player and major economy, the UK’s development relationship with India has evolved to focus on areas of shared interest.

Ms Patel held talks with Prime Minister Modi, whose historic visit to Britain last November marked the start of a new era in the UK-India relationship aimed at strengthening bonds in areas such as business, education, defence, security and culture. Ms Patel and the Prime Minister discussed a package of UK technical assistance and support for India to boost economic growth, jobs and trade, which will also benefit Britain.

Meeting a range of Indian government ministers, including for finance, urban development and external affairs, the International Development Secretary underlined that Britain is open for business, and that we remain outward-looking and engaged internationally.

The government wants to deepen these bonds further, to grow our economies and boost trade and investment in both our countries. I discussed this with Prime Minister Modi, who set out his ambitious vision for our relationship when he visited the UK last year.

As India develops into a major and growing economy, it is absolutely right that UK support, including that provided by my department, has moved away from traditional financial aid – which ended last year – to technical assistance and sharing skills and expertise.

Britain is an outward-looking and global nation and DFID will continue to support the UK’s trading partners of the future, working closely with the Foreign and Commonwealth Office and the new Department for International Trade, and creating opportunities for British businesses too.

The International Development Secretary welcomed the partnership with the Ministry of Finance which is strengthening UK-India links on economic development and reform priorities. During a discussion with India’s Finance Minister and meetings with leading financial companies, Ms Patel outlined how the UK is supporting India’s economic agenda by building smart cities, boosting skills, making it easier to do business, improving energy infrastructure and harnessing the financing power of the City of London.

The launch earlier this month of the first rupee-denominated bond in London is an example of the close and growing economic cooperation between the UK and India and underlines the capital’s status as a leading global hub for innovative finance. UK support for India’s ‘Smart Cities Mission’ will see Britain share expertise in finance, infrastructure, governance and security to strengthen urban development in India by helping to plan, design and build smart cities, which will in turn boost jobs, growth and prosperity for both India and the UK.

Ms Patel also met the Chief Minister of Madhya Pradesh where she agreed a partnership with the region on smart cities and announced that the UK will be a partner country for the Madhya Pradesh Global Investor Summit later this year. This delivers on a key commitment from Prime Minister Modi’s visit to Britain last year.

The new UK support for India’s economic development – including two venture funds and equity investments in innovative businesses – will help 2 million more people across the country access the finance they need to get jobs, start businesses and support their families. Investing in India’s private sector benefits India’s poorest people while also generating a return on investment for the UK, helping to build a more prosperous future for both countries.