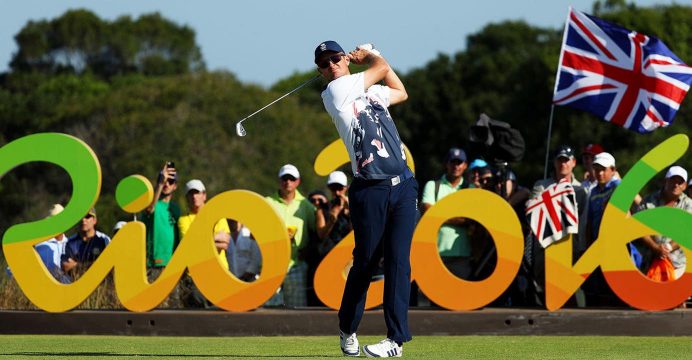 Great Britain’s Justin Rose clinched golf gold ahead of Sweden’s Henrik Stenson in dramatic fashion, as the battle for the first Olympic title in 112 years went all the way to the 18th hole of the fourth and final round at the Rio 2016 Olympic games.

Capping a thrilling final round that saw the two Ryder Cup team-mates go blow for blow, Rose birdied the last to win the title by two strokes from the Swede. Giving his reaction after carding a final round four-under-par 67 to enter golfing and Olympic history, the jubilant British player said: “Olympic champion? That has a cool ring to it! The medal ceremony was surreal. I’ve watched many on TV. I never thought I’d be involved in one. Honestly, this is just a dream come true. I’ve been thinking about Rio for a long, long time. It is just crazy, just so good.”

Sparing a word for his Swedish opponent, Rose added: “I was in a great fight with Henrik, a good friend of mine, and it took world class golf to win today, so I am very proud of the achievement and I’ve just got to let it all soak in now.”

Rose had made history on day one of the four-day tournament, when he conjured up a hole-in-one at the par three fourth hole. That ensured that golf, which was making its long-awaited return to the Olympic programme after an absence of more than a century, captured plenty of headlines. And Rose was never far from the thick of the action.

In the first round it was little-feted Australian Marcus Fraser who stormed into the lead, but the 36-year-old was never too far from the lead, and over the subsequent three rounds, he and Stenson, laid on an entertaining and at times thrilling duel, which captured the collective imagination of the Rio public.