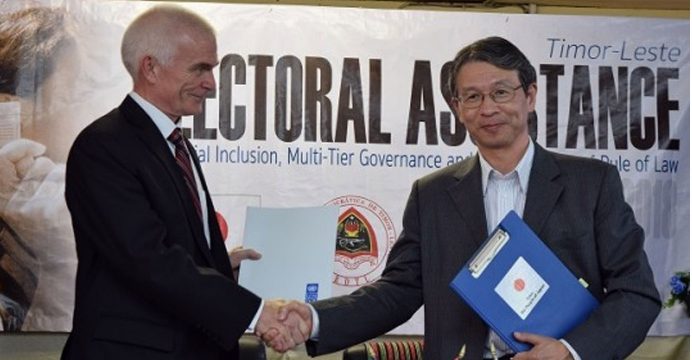 The United Nations Development Programme (UNDP) and the Government of Japan are signing a cost-sharing agreement to formalize funding support of over US$3.8 million (JPY 388,000,000) for an umbrella programme on “Electoral Assistance for Social Inclusion, Multi-Tier Governance, and Strengthening of Rule of Law in Timor-Leste 2016-2018.”

This project builds on the achievements of current and recent projects in democratic governance supported by the Government of Japan and supports a variety of actors, including Electoral Management Bodies (EMBs), civil society organizations, the media, the justice sector and the national police. The programme will cover support to Electoral Management Bodies, voter education, and political participation by women and youth, political journalism, electoral justice, election security. This cross-cutting and multi-pronged assistance will support the increasing institutional capacity of Timor-Leste’s state actors and will help consolidate local and national democracy in Timor-Leste.

“Timor-Leste is a country of democracy, freedom and rule of law. So is Japan. As democratic countries, we both share common fundamental values. Among others, holding free and fair elections is a prerequisite for democracy…I hope that the upcoming elections will be conducted in a free and fair manner and without violence and political instability” said H.E. Mr. Eiji Yamamoto, Ambassador of Japan in his opening remarks during the signing ceremony held in Dili.

“This is one of the most important contributions from the international community to consolidate our democratic state and rule of law. It is a gesture of friendship and generosity, and I would like to thank the Government and people of Japan for this renewed relationship of trust.” said Minister of State, Coordinator of State Administration Affairs and Justice, and Minister of State Administration, H.E. Mr. Dionisio Soares Babo.

On the same occasion, Mr. Knut Ostby, the UN Resident Coordinator and UNDP Resident Representative for Timor-Leste thanked the representatives of Japan and the government counterparts for the constructive cooperation during the development of this election programme. The programme was designed to extend overarching support to different national institutions, whose mandates are key to achieving fair and inclusive elections.

“Timor-Leste has successfully transitioned from conflict to development. Free and fair elections provide strong foundations for democracy and development in the country. Our new programme is expected to consolidate Timor-Leste’s governance sector by strengthening the capacities of Electoral Management Bodies and the state actors working in a rule of law” said Knut Ostby, UN Resident Coordinator and UNDP Resident Representative.