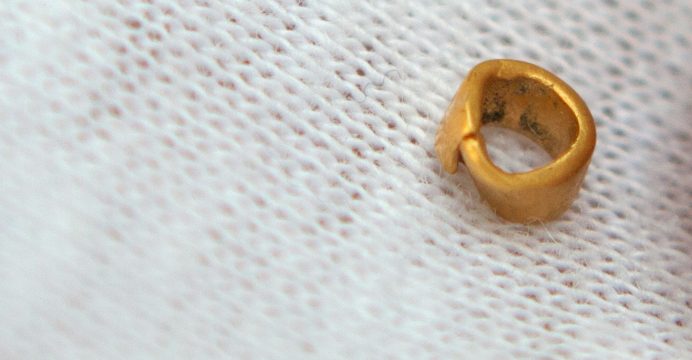 Tiny bead from Bulgaria may be world’s oldest gold artifact

It may be just a tiny gold bead – 4 mm (1/8 inch) in diameter – but it is an enormous discovery for Bulgarian archaeologists who say they have found Europe’s – and probably the world’s – oldest gold artifact.

The bead, found at a pre-historic settlement in southern Bulgaria, dates back to 4,500-4,600 B.C., the archaeologists say, making it some 200 years older than jewelry from a Copper Age necropolis in the Bulgarian Black Sea city of Varna, the oldest processed gold previously unearthed, in 1972 , reports Reuters.

“I have no doubt that it is older than the Varna gold,” Yavor Boyadzhiev, associated professor at the Bulgarian Academy of Science, said.

“It’s a really important discovery. It is a tiny piece of gold but big enough to find its place in history.”

Boyadzhiev, believes the bead was made at the site, just outside the modern town of Pazardzhik, which he says was the first “urban” settlement in Europe, peopled by “a highly-cultured society” which moved there from Anatolia, in today’s Turkey, around 6,000 B.C.

“I would say it is a prototype of a modern town, though we can say what we have here is an ancient town, judged by Mesopotamian standards,” Boyadzhiev said.

“But we are talking about a place which preceded Sumer by more than 1,000 years,” he added, referring to what is usually considered the first urban civilization, based in southern Mesopotamia, modern day Iraq.

The gold bead, weighing 15 centigrams (0.005 ounce), was dug up two weeks ago in the remains of a small house that would have stood at a time when metals such as copper and gold were being used for a first time.

The settlement unearthed so far is between 10 and 12 hectares (25-30 acres) and would have had a 2.8-metre-high (9-foot) fortress wall. Anything over 0.7-0.8 hectares is regarded as a town by researchers working in Mesopotamia, Boyadzhiev said.

More than 150 ceramic figures of birds have been found at the site, indicating the animal was probably worshipped by the town’s people. The settlement was destroyed by hostile tribes who invaded from the north-east around 4,100 B.C.

The bead will be exhibited in the historical museum in Pazardzhik once it has been thoroughly analyzed and its age confirmed, a museum worker said.