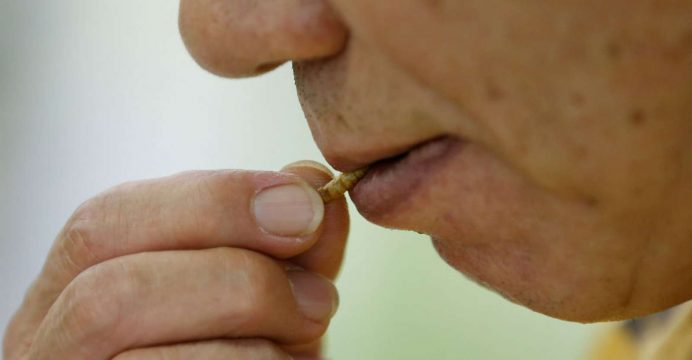 Bae Su-Hyeon’s lunch of sweet potato soup and funghi pasta has bugs in it. They’re part of the recipe.

“It didn’t feel like eating insects,” says Bae, an 18-year-old student having lunch with a friend at Papillon’s Kitchen, a Seoul restaurant specialising in insect, reports Reuters.

That’s because the mealworms in her dishes were hydrolised into powder to make the pasta and soup.

Insect-eating, or entomophagy, has long been common in much of the world, including South Korea, where boiled silky worm pupae, or beondegi, are a popular snack. Now, South Korea is looking to expand its insect industry as a source of agricultural income by promoting more consumption, joining a global trend that has seen rising interest in insects as a nutritious and environmentally friendly food.

To do that, the government is trying to make people more comfortable with the idea of eating crickets and mealworms that are ground into powder or hydrolysed to extract oils and protein and turned into food, from ice cream to sausages.

“If people taste foods after having a good first impression, and find they are delicious, that’s everything, because taste speaks for itself,” he said this week at a tasting event staged by the Agriculture Ministry.

South Korea’s insect industry was worth 304 billion won ($278 million) last year, nearly double from 2011, although food for humans accounted for just 6 billion won of that with the rest coming from uses like animal feed.

The government wants to expand the industry to 530 billion won by 2020, with food making up nearly a fifth.

Insects can be a rich source of fat, protein, vitamins, fibre and minerals, according to the U.N. Food and Agriculture Organization (FAO). The composition of unsaturated omega-3 and six fatty acids in mealworms is comparable to that in fish and higher than in beef and pork, it says.

Globally, at least 2 billion people eat insects and more than 1,900 species have been used for food, according to the FAO, which said entomophagy could play a key role in food security and environmental protection. Insects need less land and water than cattle.

Kim Jong Hee, who has been raising insects since 2000 for animal feed, began farming mealworms and crickets for people in 2013.

“In the past, people used to shake their heads when they thought of bugs, but now more people believe insects are edible,” he said.