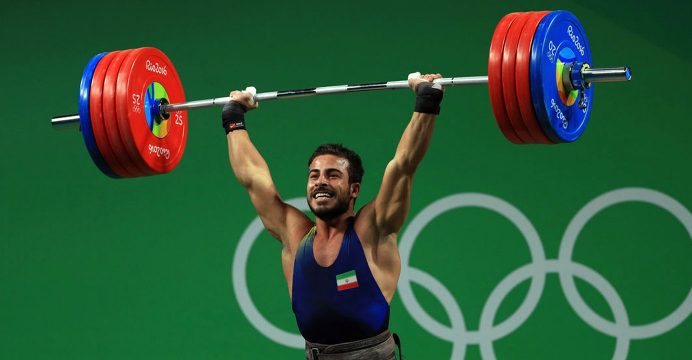 Iran’s kianoush rostami broke his own world record to win the men’s 85kg weightlifting at rio 2016 and clinch his country’s first medal of the games. Meanwhile rim-jong-sim opened the democratic people’s republic of korea’s rio gold account with in the women’s 75kg.

The 25-year-old Rostami, who finished with a bronze in the same weight category in London four years ago, lifted217kg with his final clean and jerk for a total of 396kg, beating his world record by one kilogramme. Tian Tao of China took silver with 395kg despite making only two of his six lifts, while Romania’s Gabriel Sincraian, who lifted a total of 390kg, took bronze.

Rostami looked supremely confident throughout, though he admitted to feeling a bit of uncertainty. “I have lifted 225kg in training, but that 217kg was a challenge,” the Iranian told reporters. “Anything can happen.”

When he made his first two snatches with apparent ease, Rostami bowed and gestured to the crowd. However, he missed his third attempt and finished the snatch only 1kg ahead of his main rival, Tian, who himself had earlier come desperately close to being eliminated after several failed attempts. “I offer my congratulations to the winner and hope we have many more chances to compete against each other. I am confident I can beat him,” said Tian.

Rostami also predicted more weightlifting gold medals for Iran, which boasts the favourites in two of the remaining three men’s medal events, Sohrab Moradi in the 94kg and Behdad Salimikordabiasi in the super-heavyweights. “We will see more gold medals, and more world records for Iran,” said Rostami. “Now that I have won, I’m sure others will win too.”