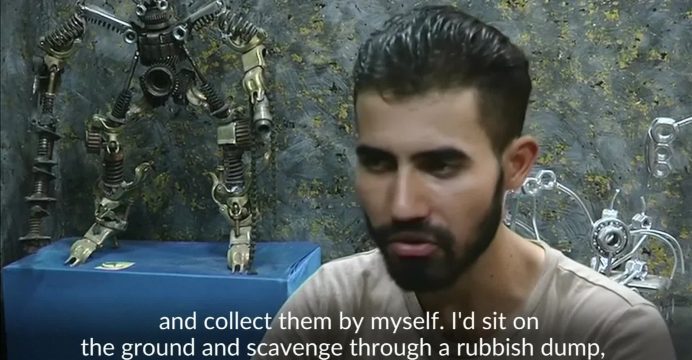 He may not have attended art school or received any formal training, but Iraqi artist Abdul Qader al-Na’ib has managed to build a reputation as the man who turns scrap metal into art.

This workshop in Baghdad’s southern suburb of Dora is where the 24-year-old creates unique sculptures from scrap metal pieces, reports Reuters.

These sculptures are made from nuts and bolts, automotive parts and other discarded metallic appliances that are cleverly welded together to form unique artworks.

Na’ib’s passion for art started at a tender age, having spent almost seven years learning and mastering the art of engraving on wood and stone before shifting his attention completely to scrap metal art in the past two years, which he taught himself as he was forced to leave school early to work to assist his ailing father.

In the midst of a successful career in engraving, Na’ib discovered an exciting new direction: scrap iron sculpting, and said that each new creation helped him grow and develop as an artist.

This unusual detour began about two years ago, when he created a five centimeter long motorbike sculpture with meticulous details, all from parts of watches including cogwheels and fuse.

This specific piece ignited his interest in scrap metal art, and he started to look at it as a creative outlet which he could potentially master and excel.

“I am self-taught as I could not go and study to develop my skill. I made several art pieces. I made around 22 art pieces before shifting my attention to scrap metal art. I liked the idea because I wanted to do something different and I wanted to do something to serve the society. I’ve found out that it is well-known international art form, which is used to preserve the environment and improve children’s mentality by teaching them how to rationalize the use of materials and eventually preserve the environment,” said Na’ib, sitting in his workshop filled with various kinds of discarded scrap metal.

Na’ib is currently working on a giant robot, a scrap replica of the Harvester or the hunter killer creature that appeared in The Terminator movie.

Laid out on the table next to him are a scrap metal ant, a realistic-looking camera and a structure of a motorbike and several small robots.

Scrap metal art is not a well-known concept in Iraq and people are often surprised to find that Na’ib’s sculptures are made from bits of metal that were thrown away. So he opened a Facebook page and started to post details and information about the art while displaying his own artworks.

The move, he said, has helped him gain a large following and he eventually started receiving requests to create bespoke pieces for clients.

“I started the idea one and a half years ago alone without help from anyone, and people were surprised to hear about scrap art until I opened a page on the Facebook and gave it the name ‘The Scrap Art’ and I dedicated it to this art. I started to post on it everything related to this form of art. After that I started to receive requests from people who asked me to further develop the idea and thus I started to create professional art pieces and display them at shows in Iraq, and I put on them on display at exhibitions held at ministries, schools, streets and everywhere,” he explained.

A friend’s support enabled Na’ib to open a small workshop recently, where he can work and sell his sculptures. However he stressed that he would only sell his creations to those who appreciate his art.

“When I started I was not intending to sell, my intention was only to put my works on display. But when I opened the workshop with the help of a friend, who opened the workshop for me and supplied me with the materials and the tools and we started a business as partners, I felt the need for money to cover the costs and to keep the workshop open for people. People can come to this place to see my art works and buy them, and they even can take some pieces free of charge. I managed to sell my works, however, I always try not to sell to just anyone or ordinary people,” Na’ib said.

Scrap metals are like puzzle pieces that can be rearranged to form a unique structure, says Na’ib, and each piece take him anywhere from a few hours to over a month to complete.

According to Na’ib, although Iraq is awash with thousands of tonnes of scrap metal of various kinds, access to the scrap yards is very difficult and restricted as permission from Baghdad Mayoralty is needed, thus forcing him instead to look for pieces discarded in bins or in the street.

Na’ib says he believes in turning scrap into treasure to reduce waste, promote a low-carbon economy, and create a unique type of industrial art. Therefore he spends most of his time picking through dumps in search of useable scrap metals, which he chooses by looking at the pattern of the material despite unwelcoming comments and stares from passersby.

“I collect used car pieces, which I found discarded in the streets. I would go search for pieces and collect them by myself. I’d sit on ground and scavenge on a rubbish dump, and I often got criticized for doing that and many people told me that it is shameful to do that, but nevertheless I didn’t feel ashamed and I did not waver or hesitate,” he said.