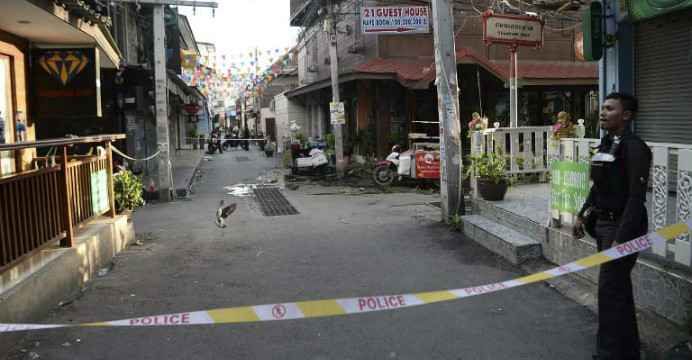 A string of bomb attacks in Thailand killed 4 people

Twin bombs exploded in the upscale resort of Hua Hin late Thursday, killing one woman and wounding more than 20 others, including nine foreign tourists, and were followed by two more on Friday morning that killed another person.

A further two blasts struck Friday in the popular tourist town of Phuket, while two more bombs were reported in the southern provinces of Trang and Surat Thani, in each of which one person was killed. Prime Minister Prayut Chan-O-Cha called for calm and said he did not know who was behind the attacks.

“The bombs are an attempt to create chaos and confusion,” he told reporters.

“We should not make people panic more.”

“Why the bombs occurred as our country is heading towards stability, a better economy and tourism — and who did it — you have to find out for me,” he added. 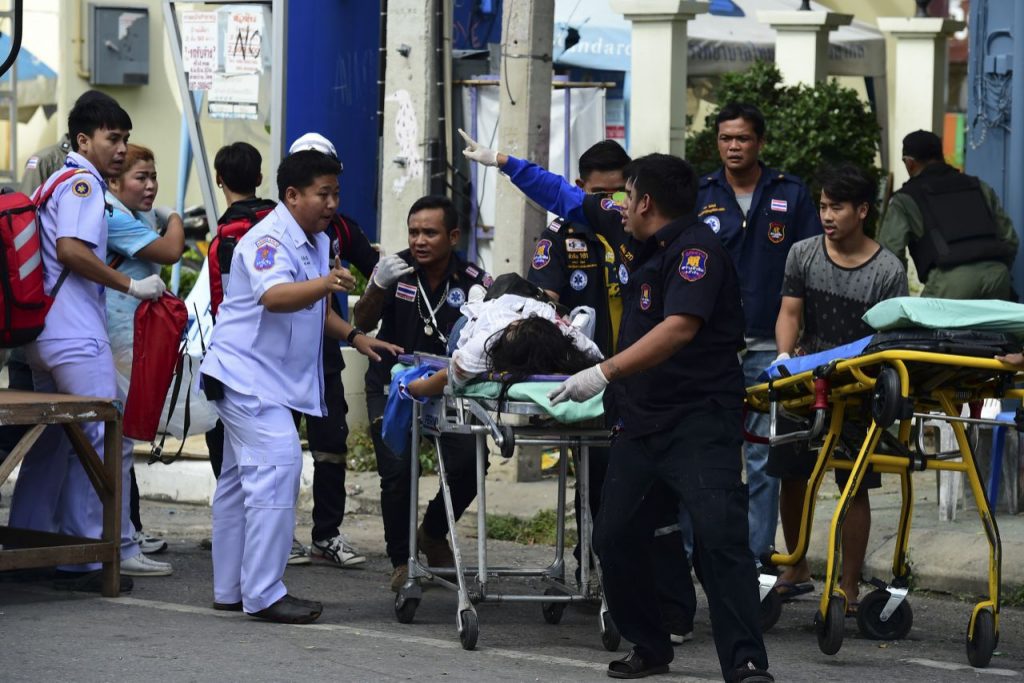 Thai rescue workers attend to an injured victim after a bomb exploded in Hua Hin on August 12, 2016

The two bombs that went off in Hua Hin on Thursday evening were hidden in potted plants and went off within 30 minutes of each other in the bar district of the popular beach town.

While small bombings are common in the kingdom during periods of heightened political tension, there have been few such incidents in the past year and it is rare for tourists to be targeted.

Hua Hin is home to the summer palace of Thailand’s revered royal family and the blast came on the eve of Queen Sirikit’s 84th birthday and just ahead of the first anniversary of a Bangkok shrine bombing that killed 20. Authorities were searching for leads on the attackers and a motive behind the latest blasts.

Hua Hin’s district chief, Sutthipong Klai-udom, told reporters that the bombs on Thursday evening were detonated by mobile phone. According to staff at local hospitals, German, Italian, Dutch and Austrian nationals were among the wounded.

“It was very shocking. There was a loud noise and police were running everywhere, it was terrible,” said Michael Edwards, an Australian tourist staying in a guesthouse close to where the second bomb detonated.

“I was just surprised that it happened here… now I’m thinking if it’s worth staying,” he told reporters.

Hua Hin is an upscale resort town about 200 kilometres (125 miles) south of Bangkok, popular with both local and foreign tourists.

It is also home to a palace for years favoured by Thailand’s revered King Bhumibol Adulyadej, the world’s longest reigning monarch.

The 88-year-old is currently hospitalised in Bangkok for a myriad of health complications, a pressing source of anxiety for many Thais and a key factor in the kingdom’s past decade of political turmoil.

Thailand’s reputation as the “Land of Smiles” has suffered in recent years from crimes against foreigners and political unrest.

But tourists continue to flock to its white, sandy beaches and Buddhist temples. The kingdom is expecting a record 32 million visitors in 2016, with the tourism industry a bright spot in an otherwise lacklustre economy.

The latest blasts came just days before the first anniversary of the last major attack on tourists in Thailand — an August 17 bomb that killed 20 people, mostly ethnic Chinese tourists.

The blast ripped through a crowded Hindu shrine in the heart of Bangkok and stunned the kingdom as the deadliest assault in recent history.

Two Uighur men from western China have been accused of the attack and are due to go on trial later this month. Both deny any involvement in the bombing and mystery continues to swirl around the case, with authorities failing to catch a number of other suspects or offer a thorough explanation for a motive.

Thailand’s military junta, which seized power in 2014 after a decade of at times violent political unrest, has touted an increased instability in the kingdom as a major accomplishment of its rule.

Yet the generals have failed to quell a long-running Islamic insurgency in Thailand’s three southernmost provinces — a region far from Bangkok or Hua Hin.

The conflict is largely contained to the far south but violence has occasionally spilled into other areas. Zachary Abuza, an expert on militants in Southeast Asia, said it would be “very unusual” for the insurgents to target Hua Hin.

If southern rebels were behind the recent blasts, “it is almost definitely a small cell operating on their own initiative”, he told reporters.