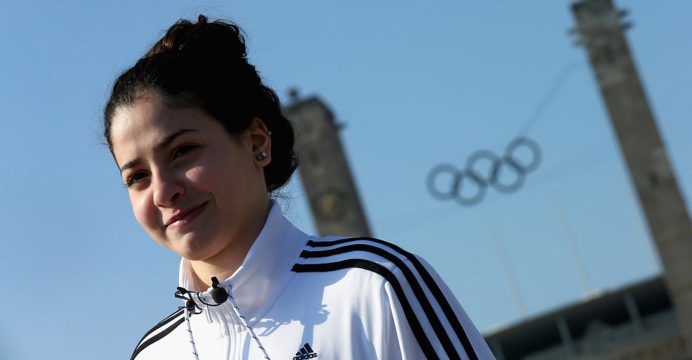 When Yusra Mardini dove into the Olympic pool, she made history. It wasn’t her time on the scoreboard — it was simply that she was there, reports cbsnews.

“When you are an athlete, you don’t think if you are Syrian, or London or from Germany, you will just think about your race.”

Last August, four years into the Syrian civil war, the 18-year-old fled her home. Like many other refugees, she and her sister ended up on a small boat bound for the island of Lesbos off the coast of Greece.

The boat began to sink, and Yusra jumped in the water.

“It was quite hard to think that you are a swimmer, and you are gonna end up dying in the water,” she said.

“Everyone was praying on the boat and they were telling me like ‘You are really Courage Girl,’ and was like ‘Just shut up and leave me alone now.'”

For three hours she and her sister pushed the boat to shore, saving nearly 20 lives. Yusra traveled 1,500 miles through Turkey and central Europe before settling in Berlin, Germany, where she’s been training for the Olympics.

She’s now part of the first refugee team to ever compete in the Games.

“When you have problem in your life that doesn’t mean you need to sit down and cry like babies. The problem was the reason why I am here, and why I am stronger and I want to reach my goals.”

She stepped onto the starting block with high hopes Wednesday but finished seventh out of eight in her heat. So Yusra won’t be leaving Rio with an Olympic medal.

But it doesn’t matter. She already swam the race of a lifetime.