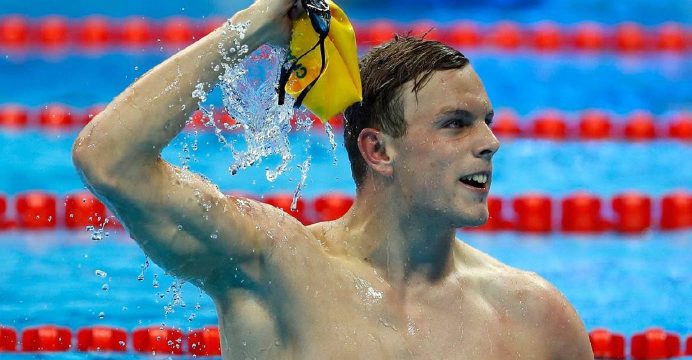 Australian teenager Kyle Chalmers ended 48 years of agony and frustration for his swimming-crazy country when he won the men’s 100m freestyle gold medal at the Rio Olympics on Wednesday, reports BSS.

The 18-year-old stormed home on the final lap after turning in seventh place to get his hands on the wall first in a blanket finish.

He won in a time of 47.58 seconds, breaking his own world junior record.

He finished just 0.22 ahead of Belgian silver medallist Pieter Timmers and 0.27 in front of American Nathan Adrian, the gold medallist in London four years ago, who went into the final as the fastest qualifier.

“I’m very happy with tonight’s execution of the race,” said Chalmers, who won the world junior title a year ago but has soared up the rankings to reach the pinnacle of the sport.

He became the youngest winner of the men’s 100m freestyle gold medal in 36 years but his joy was tempered by the fact his teammate Cameron McEvoy finished seventh.

McEvoy was ranked number one in the world heading into the Olympics but could not reproduce his best times in Rio.

“It’s very exciting but it’s hard in this situation because my team mate Cameron McEvoy has looked after me all week and I’ve roomed with him,” said Chalmers.

“I don’t want to celebrate too much because I know it would have been really hard for him tonight but I’m sure towards the end of the week I’ll be a bit more excited.”

“I’ve won an Olympic gold medal and he probably hasn’t swum to his best but hopefully he turns around tomorrow and swims well in the 50. He’s a great guy and we get along really well so it’s hard.”

The 100m freestyle is the blue riband event of men’s swimming, a race that tests the nerves as much as the speed of competitors with medals often decided by the length of a fingernail.