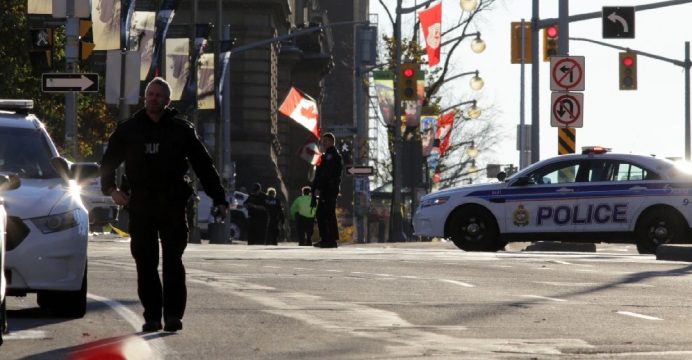 There was no immediate confirmation from Canada’s federal police that anyone had been shot, with a statement saying only that a suspect had been identified and that they had taken “action” after receiving “credible information” about a potential attack.

“Earlier today, the RCMP received credible information of a potential terrorist threat. A suspect was identified and the proper course of action has been taken to ensure that there is no danger to the public’s safety,” the Royal Canadian Mounted Police (RCMP) said in a statement.

They did not say where the incident took place. Media reports said the suspect was a 24-year-old man who had been arrested in 2015 for expressing support for the Islamic State group in postings on social media. He had been released in February but was being strictly monitored.

According to a family member who spoke to Canadian broadcaster CBC, the police had informed them that he was shot dead as he was about to detonate an explosive device.

Broadcaster CTV also reported that the suspect was allegedly linked to IS and had been planning to set off an explosive device in a packed public space in a major city, citing internal government documents.

The RCMP said an investigation was under way as the matter “continues to unfold,” and no other details from officials were immediately available.

Canada was the target of two separate lone wolf attacks in October 2014 in Quebec and Ottawa that resulted in the death of two soldiers.

In Saint-Jean-sur-Richelieu, 40 kilometers (25 miles) southeast of Montreal, a young man drove his car into two soldiers in a parking lot, killing one of them before being shot dead by police after a short chase.

Two days later on October 22, an attacker gunned down a ceremonial military guard and stormed parliament before being killed by security guards only meters (yards) from a room where the prime minister and his caucus were meeting.

Canada joined the US-led coalition against IS in September 2014. After his Liberals unseated the Tories in a general election last year, Prime Minister Justin Trudeau scaled back Canada’s participation in the coalition, ordering the withdrawal of Canadian fighter jets but increasing the number of military trainers in Iraq.

On several occasions, Trudeau has reaffirmed his government’s commitment to “fight terrorism in all its forms” and work closely with allies.