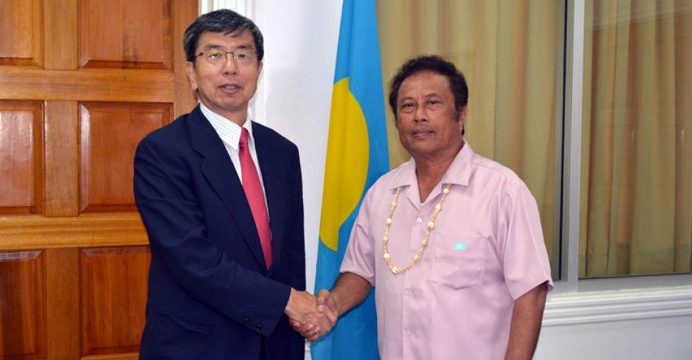 In an official address to a joint session of the Palau National Congress today, Mr. Nakao commended Palau’s commitment to achieving sustainable, inclusive growth. He emphasized the need to boost investment in water and sanitation and information technology to enable Palau to capitalize on the benefits from increased tourism while improving public services.

Palau’s economy expanded by a historic high 9.2% in fiscal year (FY) 2015 ending 30 September 2015, mainly due to the strong growth of tourism-related activities. However, growth is expected to moderate to 3% in 2016. This comes as tourism numbers are declining because of an economic slowdown in some of Palau’s key markets and with fewer flights due to government restrictions and problems with a major tour operator’s aircraft. ADB forecasts the economy will rebind in 2017, as the benefits of current public infrastructure projects, as well as construction and renovation of hotels and other tourist facilities are realized.

Mr. Nakao is scheduled Friday to meet with representatives of Palau’s Chamber of Commerce to discuss tourism sector development and with youth and civil society groups.

During his 2-day visit to Palau, Mr. Nakao will visit the proposed cable landing site under the $25.0 million ADB-financed submarine cable project. The project will help build a fiber-optic cable link between Palau and the internet hub in Guam, bringing high-speed internet to Palau for the first time. It will better connect Pacific countries to the rest of the world, promote greater efficiency in their small markets, and create employment opportunities.

Mr. Nakao is also scheduled to visit ADB’s $28.8 million Koror-Airai sanitation project. The project will develop a new sewerage system in the town of Airai, and reduce the frequency and severity of uncontrolled sewage flows. The improvements will result in better sanitation for about 80% of Palau’s population of around 20,000 people who live in Airai and the town of Koror.

Palau became a member country of ADB in 2003. Since then, ADB has approved $73.8 million in loans, grants, and technical assistance for the country.