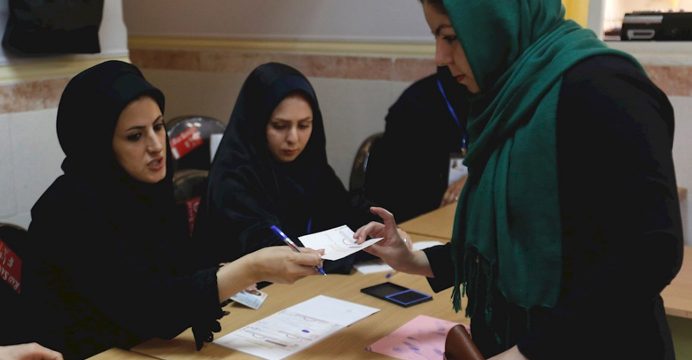 Iranian authorities have intensified their repression of women’s rights activists in the country in the first half of this year, carrying out a series of harsh interrogations and increasingly likening any collective initiative relating to women’s rights to criminal activity, Amnesty International said today.

The organization’s research reveals that since January 2016 more than a dozen women’s rights activists in Tehran have been summoned for long, intensive interrogations by the Revolutionary Guards, and threatened with imprisonment on national security-related charges. Many had been involved in a campaign launched in October 2015, which advocated for increased representation of women in Iran’s February 2016 parliamentary election.

“It is utterly shameful that the Iranian authorities are treating peaceful activists who seek women’s equal participation in decision-making bodies as enemies of the state. Speaking up for women’s equality is not a crime. We are calling for an immediate end to this heightened harassment and intimidation, which is yet another blow for women’s rights in Iran,” said Magdalena Mughrabi, Interim Deputy Middle East and North Africa Programme Director at Amnesty International.

“Rather than addressing Iran’s disturbing record on women’s rights the Iranian authorities have once again opted for repression, accusing women’s rights activists of collusion in western-orchestrated plots in a bid to maintain their discriminatory practices towards women.”

The women summoned for interrogation were given no reason for the summonses they received, but once inside the interrogation room they were bombarded with accusations of espionage and collusion with “foreign-based currents seeking the overthrow of the Islamic Republic system”. Amnesty International understands that the Revolutionary Guards subjected the women to verbal abuse, including gender-related slurs. The activists were not allowed to be accompanied by their lawyers during the interrogations, which lasted in some cases up to eight hours.

Amnesty International understands that the interrogations focused, in particular, on two local initiatives: a website called “Feminist School”, which posts reports and articles on issues related to feminist theories and practices and the state of women’s rights in Iran and globally; and the Campaign to Change the Masculine Face of Parliament, launched ahead of the February 2016 parliamentary elections in Iran to push for the increased presence of pro women’s rights candidates in parliament.

Members of both initiatives have been pressured to close or suspend their activities and practice heightened self-censorship. In its final statement, the Campaign to Change the Masculine Face of Parliament explained how its achievements in terms of generating a five-fold increase in the number of women seeking candidacy, highlighting the demands of women for equality, and naming and shaming candidates with a history of making sexist remarks, have attracted the wrath of security bodies, leading to repeated summons, threats, prolonged interrogations, and the opening of new national security-related cases against the campaign’s active members. The Feminist School website has not been updated since the middle of February 2016.

The latest target of this intensified crackdown is the renowned women’s rights magazine Zanan-e Emrooz (Today’s Women) which announced it was suspending its activities on 26 July.