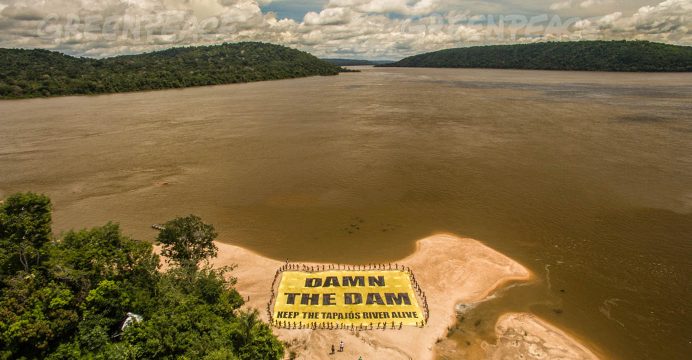 Mega dam in the heart of Amazon is cancelled

the Brazilian environmental agency, IBAMA, has announced the licensing process to build the São Luiz do Tapajós (SLT), a giant dam planned for one of the last major free-flowing rivers in the Brazilian Amazon, has been canceled. Without the license, the approval process for the mega dam cannot move forward.

Greenpeace applauds the decision to cancel the licensing, if allowed to continue the mega dam would have caused irreversible damages to the environment and the Munduruku People’s way of life.

“We Munduruku people are very happy with the news. This is very important for us. Now we will continue to fight against other dams in our river,” said Arnaldo Kabá Munduruku, General Chief Munduruku.

“Now that the license has been canceled, the Brazilian Ministry of Justice must recognize its obligation and move swiftly to officially demarcate the Sawré Muybu territory,” says Danicley Aguiar, Greenpeace Brazil campaigner.

In the last few months, more than 1.2 million people around the world joined the Munduruku to say no to the SLT dam and pressure multinational companies like Siemens to distance themselves from the project.

“This is a great victory for the Munduruku Indigenous People who live in the Tapajós region and whose traditions and rights were deeply threatened by the dam and for everyone who cares about the Amazon forest and support the Munduruku globally,” said Danicley Aguiar, Greenpeace Brazil campaigner.

Other Brazilian agencies – FUNAI (National Indigenous Foundation) and federal public prosecutors in the state of Pará – have recommended IBAMA cancel the license because the project would displace the Munduruku, making it unconstitutional in Brazil. Part of the Munduruku Indigenous land – Sawré Muybu – which is in the process of been officially recognized as Indigenous land, would be flooded by the dam.

In addition to the São Luiz do Tapajós, there are 42 hydro dam projects planned in the Tapajós basin and hundreds earmarked in the Amazon, part of an aggressive economic model that fails to consider the critical importance of protecting the Amazon forest and its inhabitants. Previous dams built in the Amazon had significant negative impacts on communities, the environment and have been mired in corruption scandals.

Greenpeace is calling on the Brazilian government to complete the Munduruku territorial demarcation immediately. Brazil must focus on truly renewable ways of increasing its energy matrix and become a world leader in wind and solar. With the right investments, it is possible to generate the same amount of energy that São Luiz do Tapájós would produce, by harnessing the power of wind and sun.